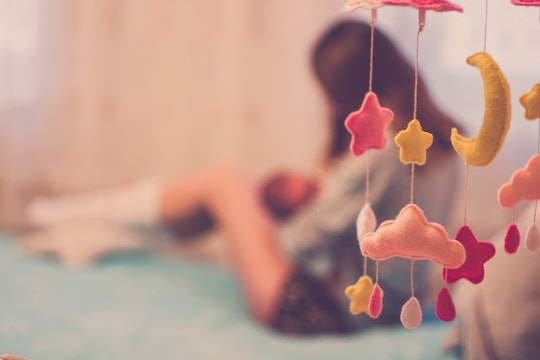 Ah, maternity leave: Sitting around the house all day in your pajamas with your always-happy newborn, playing hooky for weeks on end, and binge-watching Netflix while eating bon bons. "What a vacation," said no new mother ever. And this mom's viral thread about maternity leave perfectly explains why it isn't a vacation. Not even close.

Reddit user "theaeater" is an expectant mom who vented her pregnancy-related workplace woes on a thread posted today. She isn't due with her first child until Christmas Eve, but already her co-workers and bosses are acting as if pregnancy is NBD and maternity leave is some luxury getaway.

"It's really funny how just because pregnancy is often a joyous occasion that one chooses to undergo, it's not seen in the same lens as any other medical condition," she wrote on the thread. "I've had to ask for some concessions from work because of some difficulties relating to my pregnancy, and to my bemusement, they're being taken as 'favors' being done for me."

For instance, the mom-to-be decided she couldn't go on a work trip in late October and instead is attempting to find other solutions in her workplace and filling in gaps when possible. In exchange for pregnancy-related accommodations at work, she said she's received backhanded requests from her company's employees to be named godparents, or for her baby to be named after them.

"Can you imagine if you had some other kind of serious medical condition — like a tumor, or a serious infection, or auto-immune disease — and you declined going on a business trip so as not to to aggravate your illness, and being told it was a personal favor to 'let you not go'?" she pointed out.

And don't even get her started on maternity leave. Apparently, some folks seem to view this rest and recovery time after birthing a human being as "time off" for the new mother, instead of what it really is: "A genuine, physical recovery period after a fairly traumatic physical medical procedure." Still, some co-workers were perplexed as to why she would possibly need a full two months of leave.

"Because sh*t needs to heal down there, and it takes time?" the indignant mom-to-be wrote. "[What] if your doctor told you you should take a few weeks off of work to recover from a surgery or chemo and people asked you 'why does it have to be two months, though?'"

UGH. Clearly, none of her co-workers have a) given birth, or b) been on maternity leave. Because if they had, they wouldn't be asking these asinine questions.

When I was pregnant with my second child, I had my maternity leave planned and written out months before my actual due date. I sat down with my supervisor and she gave it the green light: With a combination of partially-paid time off and sick days, I would take eight weeks off after delivering my baby girl. Fast forward to six weeks postpartum, and I was getting pressured to return to work early.

Um, no. All of this was settled well in advance. I had just been cleared by my doctor at my six-week checkup, and I was counting on my two remaining weeks to allow my body to rest, build up a stash of breast milk for my daughter and potty train my toddler son. (You know, on top of breastfeeding around the clock, changing a million diapers, wrangling said toddler, and still managing to function on little sleep.) It's not like I was sitting at home twiddling my thumbs.

I guess it's difficult to imagine what it's like, physically and emotionally, in the weeks after giving birth if you've never experienced it for yourself. As one commenter on the Reddit thread pointed out:

I understood that women needed time to recover after pregnancy, but 2 months seemed like a long time... until I delivered. I was SHOCKED at how weak I was afterwards. I would get angry that my body was exhausted from walking to the bathroom because I wanted to do more, but physically couldn't. At 6 weeks, I thought, "Some women have to go back to work at this point" and I felt an unfathomable pain for women who must do that. Even at 8 weeks, I thought about how bad I would do if I had to go back to my job full time.

And yet, women in the United States aren't guaranteed any paid time off after welcoming a child to their family. Plus, if you don't meet certain criteria — if you don't work for a company with 50 or more employees or haven't been with your employer for at least 12 months — you wouldn't even qualify for job-protected, unpaid leave under the Family & Medical Leave Act. (Which is probably why a staggering one in four new mothers head back to work, as HuffPost reported, only two weeks after giving birth.) But I digress.

In case you're wondering if the original poster of the Reddit threat is really going to name her baby after a co-worker for just acting like a decent human being, here's your answer: "We already have a name picked out and I don't think we're doing godparents, so folks are SOL and will just have to be decent colleagues for the sheer joy of it." Mic drop.