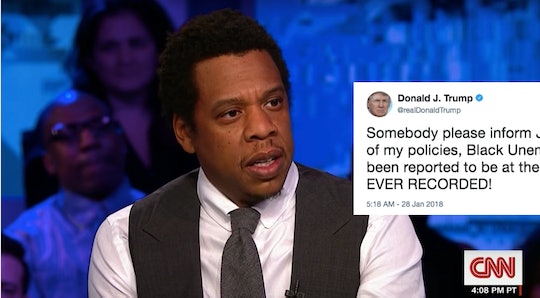 Trump Fires Back At JAY-Z After CNN Interview, But Totally Misses The Point

Another day, another tweet, and President Donald Trump has missed the point yet again. In a tweet on Sunday morning, Trump had a message for JAY-Z about black employment after the 48-year-old rapper criticized the president's alleged use of the word "sh*thole" when reportedly referencing Haiti and African nations, as well as his overall actions and policies throughout his presidency thus far. But again, it seems as though Trump didn't quite get it and patted himself on the back instead.

On Saturday evening, JAY-Z appeared on CNN's The Van Jones Show and was asked about reports from The Washington Post that surfaced earlier this month that Trump allegedly called Haiti and African nations "sh*thole" countries during a meeting among senators. Romper's request for comment from the White House was not immediately returned, but Trump seemingly denied reports that he used of the derogatory phrase in the form on a tweet on Jan. 12.

"It is disappointing and it’s hurtful. It really is hurtful ... Everyone feels anger but after the anger, it’s really hurtful," JAY-Z told Van Jones, according to The Hill. "Because it’s looking down at a whole population of people and it’s so misinformed because these places have beautiful people and beautiful everything. This is the leader of the free world speaking like this."

He added, "On the other side, this has been going on, this is how people talk, this is how they talk behind closed doors."

Jones went on the ask JAY-Z about the black unemployment rate and whether Trump should be given more credit that it has fallen to the lowest level in history. "Does that make him a good leader?" Jones asked JAY-Z, according to CNN, to which JAY-Z responded:

No, because it's not about money at the end of the day. Money is not — money doesn't equate to happiness. It doesn't. That's missing the whole point. You treat people like human beings, then — that's the main point. ... My problem with government is I think they forget it’s real people behind these decisions that they’re making ... people going through ... real time in real pain. When you ignore that pain for so long, people act out and .... want to see something different, and that opens the door to what we’re living through now.

Trump fired back on Sunday; not by responding to JAY-Z and Jones' discussion on race relations and problematic policies being pushed through in the United States, but rather by asking "somebody" to inform JAY-Z about the black unemployment rate.

"Somebody please inform Jay-Z that because of my policies, Black Unemployment has just been reported to be at the LOWEST RATE EVER RECORDED!" the president tweeted on Sunday morning.

Yes, Trump is correct in saying that black unemployment is at an all-time low, since the U.S. Labor Department began keeping track of the numbers back in 1972, according to The Washington Post, which noted that the number fell to 6.8 percent in December.

However, this low number is not entirely due to his policies. In fact, as The Hill reported, the decline actually started to see a drastic change under President Barack Obama's administration. Black unemployment was at 13.7 percent when he started his second term in office and it had dropped to 7.8 percent when he left in 2016 — a drop of 5.9 points — according to The Washington Post. In that Sunday tweet, Trump is seemingly taking credit for a "trend he inherited," as The Washington Post put it.

It's not only misleading tweets that are problematic here; as JAY-Z told Jones, a financial gain "doesn't equate to happiness" if you "don't treat people like human beings." Yes, lower black unemployment is good, but it's not good enough and not the main issue JAY-Z was trying to bring awareness to — a disparity still exists and it will take progressive and inclusive policies, a progressive and inclusive leadership, and a lot of hard work to improve things and make this disparity disappear entirely one day. The fact that this disparity is still striking should inspire much-needed conversations on race relations in the United States.

Allegedly telling a room full of senators, "Why are we having all these people from sh*thole countries come here?" as reported by The Washington Post, doesn't help. Sen. Dick Durbin, according to HuffPost, confirming and referring to those alleged comments as “hate-filled, vile and racist” doesn't help. Previously trying to push through legislation that would temporarily ban people from six Muslim-majority countries from entering the United States and blocking transgender people from enlisting in the U.S. armed services does not help.

Constantly being at the forefront of discussions and protests because of all this, as JAY-Z suggested, simply does not make a good leader. And claiming credit for a statistic that he inherited is wrong and citing only those figures and nothing else in response to JAY-Z's CNN interview just totally misses the point of the much bigger issue at hand.