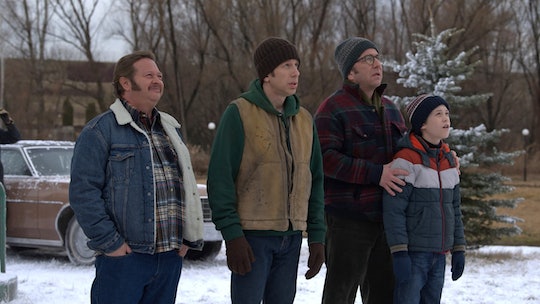 There’s definitely some more triple dog daring in store for the old gang.

If there is any movie that could stop us all from simply putting the 1983 holiday classic A Christmas Story on repeat, it might be this one. Ralphie is back in A Christmas Story sequel, and a new trailer for the movie stirs up all of those same nostalgic good feelings we all recognize from the original.

Fans know all too well that the original movie featured young Ralphie Parker and his pals (and let’s never, ever forget his younger brother Randy, his mom’s only friend) in the weeks leading up to Christmas. Dealing with the neighborhood bully Scut Farkus, listening to their favorite radio show Little Orphan Annie, desperately hoping for a Red Rider action rifle for Christmas with which they can shoot out their eyes. Now it’s time for Ralphie to come back to the old homestead on Cleveland Street where his Old Man fought so bravely with the furnace and bid a sad adieu to his Major Award leg lamp.

In the new movie, perfectly titled A Christmas Story Christmas, Ralphie is an adult man in the ‘70s who has returned home in an effort to give his kids the same kind of magical Christmas he enjoyed as a young boy himself. He reconnects with the friends from his childhood, according to Deadline, and sadly mourns the passing of the Old Man himself. Which you know is going to sprinkle in some tears along with all that laughter.

The trailer reveals Ralphie steps into the Old Man’s shoes.

In a newly released trailer for A Christmas Story Christmas, Ralphie comes home for the holidays after the death of his dad, affectionately known as “the Old Man.” His mother, now played by Julie Hagerty, tells Ralphie that his father would be so happy to see him give the family a good Christmas. And then the pressure starts to immediately get to him as his children seem less than willing, he struggles with the Christmas tree, and eventually heads off to commiserate with his old buddies, Flik and Schwartz. They raise a glass to Ralphie’s late dad, and then there’s some more triple dog daring to get the old gang going again.

The cast features some familiar faces, including Randy.

Peter Billingsley is back to play his iconic role of Ralphie in A Christmas Story Christmas, while Julie Hagerty returns as his mom who is simply called Mrs. Parker or Mom. All these years later, still no first name. R.D. Robb is back as Ralphie’s friend Schwartz, while Scott Schwartz is back as wiseguy Flick. And yes, even Scut Farkus, played again by Zack Ward, will return. Finally Ian Petrella returns as Randy, Ralphie’s annoying little brother. New cast members Erin Hayes and River Drosche play Ralphie’s wife Sandy and son Mark respectively.

Where and when can you watch A Christmas Story Christmas?

HBO Max will be streaming A Christmas Story Christmas exclusively. Fans can catch up with Ralphie and the gang starting on Nov. 17. Then watch on repeat throughout the holiday season as is A Christmas Story tradition. It won’t be the same without the Old Man, played by Darren McGavin who died in 2006. But we will all honor him and his Major Award by watching.

More Like This
Marcel The Shell Is Officially An Oscar-Nominated Movie Star
Marcel The Shell Is Heading To The Oscars!
Pixar’s 'Turning Red' Is Nominated For An Oscar — Here’s How To Watch It Right Now
20 Incredible Movies To Watch With Your Family During Black History Month & Beyond
What Parents Are Talking About — Delivered Straight To Your Inbox

This article was originally published on Oct. 19, 2022