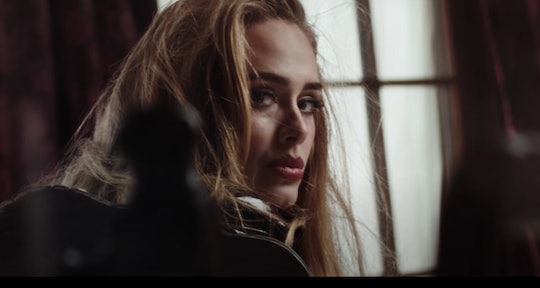 30 will drop on Nov. 19, but we can listen to the first single “Easy On Me” on repeat until then!

After years of waiting, Adele is finally releasing a new album. Naturally fans want to know every last little thing about 30, and in her first interview in five years, she opened up about her process. As a singer, an artist, a writer, and perhaps above all, a mom wanting to explain some difficult life choices to her 9-year-old son Angelo. For the first time, Adele’s album, which she just recently revealed the tracklist for, was written as something of an ode to her son, a way of explaining a difficult period in both of their lives.

Adele Announced The Release Date For 30

It’s been five years since the singer’s Grammy award-winning album 25 was released, and now Adele’s new album 30 will drop on Nov. 19. “I've learned a lot of blistering home truths about myself along the way. I've shed many layers but also wrapped myself in new ones,” she wrote on Instagram. “Discovered genuinely useful and wholesome mentalities to lead with and I feel like I've finally found my feeling again. I'd go so far as to say that I've never felt more peaceful in my life. And so, I'm ready to finally put this album out.”

“Easy On Me,” the first single of the album, dropped on Oct. 15 on YouTube, and it as viewed more than 28 million times in the first day. And from first listen it feels so personal. Introspective, a bit pleading, and thoughtful. In short... perfection.

Check Out The Tracklist

Adele released a tracklist for 30, which includes a duet version of her first release, “Easy On Me,” with fan favorite Chris Stapleton in the bonus track. Some of the song titles like “I Drink Wine,” “Oh My God,” and “Can I Get It” have Twitter talking, but let’s face it. We’re obviously going to listen to every one of the 15 songs over and over again. The full list, of 15 songs reads like a memoir:

The Inspiration Behind Her Album

In an interview with Vogue, the “Rolling In The Deep” singer admitted that she wrote much of this album as a way of explaining her divorce from ex-husband Simon Konecki, who she married and divorced when she was 30, to their son Angelo. “I just felt like I wanted to explain to him, through this record, when he's in his 20s or 30s, who I am and why I voluntarily chose to dismantle his entire life in the pursuit of my own happiness. It made him really unhappy sometimes. And that's a real wound for me that I don't know if I'll ever be able to heal.”

“Easy On Me” Sets The Tone

Adele’s theme of being able to work through a divorce can be heard strongly in “Easy On Me.” It’s all about growth as a person and why things have to change even when it’s not what people necessarily want.

“There ain't no gold in this river/ That I've been washing my hands in forever/ And there is hope in these waters/ But I can't bring myself to swim when I am drowning in this silence/ Baby, let me in.”

As much as Adele wrote the album with her son in mind, she also admits that 30 is very much for her, too. “It's sensitive for me, this record, just in how much I love it,” she told Vogue. “I always say that 21 doesn't belong to me anymore. Everyone else took it into their hearts so much. I'm not letting go of this one. This is my album. I want to share myself with everyone, but I don't think I'll ever let this one go.”

Adele’s new album 30 promises to be full of heartbreak and growth, love and acceptance. And we are counting down the days until Nov. 19 to give it a listen.

This article was originally published on Oct. 15, 2021