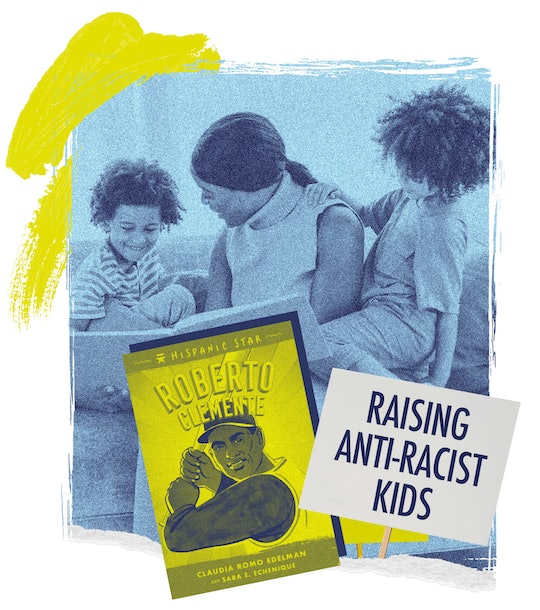 “Books allow children to understand not only our world better, but also other worlds.”

Every night, after her bath, my 3-year-old daughter sits comfortably on a floor cushion next to her bookshelf and reads. She doesn’t know any of the words, but don’t tell her that. She loves the pictures — the imagery comes to life for her. And I love the opportunity to bring into her world perspectives and stories of a wide variety of people, from myriad backgrounds and experiences. This is our priority all year round, with extra emphasis during commemorative months. This Hispanic Heritage Month, we’re reading books that center Afro-Latinx characters, and I’m happy to share some of our favorites here with you.

But first, what is glaringly obvious and needs mention is the lack of visibility given to kid’s books featuring Afro-Latinx characters. “There are more authors with these kinds of characters than we think,” Lucy Flores, co-founder of Luz Media, a digital home “for Latinas, by Latinas,” told me when I went to her in my quest for more books like this to share with my children (and yours). “The problem is that the white supremacist structure of the book publishing world keeps these wonderful stories out of the public eye by instead promoting books with light-skinned characters, thereby denying the audience the ability to discover these stories that more accurately reflect the population of the U.S.”

I don’t think I understood why all the book characters were white. I felt like they were make-believe and in make-believe land everyone was white...

Many Afro-Latinx kids face racism in the classroom, as Teach For America reported in April 2022. Afro-Latinx people also don’t see themselves reflected in the media around them nearly enough. My friend Suhayl Santana shared with me that she did not have access to books featuring Afro-Latinx people like her when she was a kid. “The only positive Afro-Latinx representation I had as a child was seeing Celia Cruz on Sesame Street — and she was an adult,” Santana reminisced. “She reminded me of my grandmother so I liked watching her. Nothing in books. Not even in the few books I had in Spanish. I don’t think I understood why all the book characters were white. I felt like they were make-believe and in make-believe land everyone was white, but that wasn’t my reality. I think I very much felt like ‘this isn’t how life really is’.”

When the younger Santana did see people who looked like her represented in the media, it was almost always a negative portrayal. “There was never positive representation of Black Latinx people,” she says. “They were always the servant, the villain, or the bad person. I wish there would have been more Black Latinx kids on TV doing normal things… and that there were more positive adult influences. That curly hair was celebrated more and not treated as a problem on TV. I remember trying to comb my hair straight because I thought that’s what people wanted to see.”

Now that she’s an adult, Santana still craves this representation. “I cried when I saw Encanto and all the shades of color and hair texture. I just bought a book that’s specifically about the youngest cousin, who is the little Black boy [in the story of Encanto]. I’m excited to give it to my nephew who is Black and Dominican.”

We dream of a world where special months aren’t needed, where we all center our parenting practices around a reflection of the world as it exists.

Of course, a lack of publicity isn’t the only reason you don’t often hear about great new children’s books starring Afro-Latinx characters. Author Claudia Romo Edelman, whose company partnered with Macmillan Children’s Publishing Group for the Hispanic Stars kids book series, tells me that books with Latinx characters make up only 6.2% of children’s books. The number of them that feature Afro Latinx characters is dreadfully less. “People in America don’t understand how much diversity there is in the Hispanic and Latinx community. One in every three African Americans is a Latinx person,” she says. Edelman, like me, believes the impact of books that reflect a child’s identity can be profound, shifting their perspective of their place in the world. “My mother was an actress and a firm believer that books are the window for new worlds. [Books] allow children to understand not only our world better, but also other worlds.”

We dream of a world where special months aren’t needed, where we all center our parenting practices around a reflection of the world as it exists. Until we get there, my kids and I lean into the opportunity presented with months like this to deepen our anti-racist practices as a family. So, here are a few of our favorite children’s books featuring Afro-Latinx characters. Hope you enjoy!

With a Coretta Scott King Award under his belt, Velasquez tells the story of a young Afro-Latinx kid’s adventure cooking an octopus with his Grandma. Filled with unexpected twists and a yucky discovery, this book, ideal for kids under 8, is sure to delight your imaginative little one. Valasquez’s non-standard Spanish used in the book is also translated at the end.

‘Be Bold! Be Brave!’ written by Naibe Reynoso and illustrated by Jone Leal
Con Todo Press

This bilingual book written by a Mexican-American multi-Emmy award-winning journalist features a cast of badass Latinas, including Pura Belpré. Pura hailed from Puerto Rico and settled in Harlem, New York, where she was a talented librarian, author and puppeteer, weaving stories about folklore and tradition and instilling in little ones a deep love for reading.

This delightful book includes the story of Celia Cruz, the iconic Afro-Cuban singer. Perfect for kids under 8, Celia’s tale traces her journeys around the world to become the unforgettable Queen of Salsa. Written in English and Spanish, this book reminds kids of the power of their own voice.

A little boy’s quest for Bongo takes him all over his house, asking the tough questions, until he finds what his heart desires, with an unlikely culprit responsible. Velasquez moves from Spanish to English in a manner that teaches young kids the elegant weaving that is language, with fun and joy.

Niño, the world champion Lucha Libra wrestler, does battle with the Lucha Queens: his two adorable baby sisters unleashing their powers on anyone in their path. From the Poopy Bomb Blowout to the Seize and Squeeze, this book is filled with bold imagery and power-packed bilingual moves that’ll amaze any reader under 8.

Your kid has probably seen the stunning artwork of Jean-Michel Basquiat, but do they know his life story? This beautifully illustrated, bilingual book for kids under 8 includes Basquiat’s story as an artist of Haitian and Puerto Rican descent whose thought-provoking work has been shown in prestigious museums the world over. Other Latinos featured include include Cesar Chavez, Jose Hernandez, and Lin-Manuel Miranda.

This Puerto Rican Baseball Hall of Famer paved the way for and inspired generations of Afro- Latinx children. From playing baseball on the streets of Carolina, Puerto Rico, to being inducted into the National Baseball Hall of Fame, Clemente is known not just for his skills on the baseball field but also for his generous heart. This book is ideal for sports-obsessed kids ages 7 and above.

Edelman’s hope for her books, and for others like them, is “to inspire every Hispanic and Latinx kid in America to feel like they belong: and that if they see it, they can be it.” That’s a hope I, too, hold as we continue to demand that publishing companies share more stories like these — and support them with the resources to reach countless homes nationwide. For little ones like my daughter, these books can show characters and people that are just like them in so many ways, while celebrating their differences.

Raising Anti-Racist Kids is a bi-weekly column written by Tabitha St. Bernard-Jacobs focused on education and actionable steps for parents who are committed to raising anti-racist children and cultivating homes rooted in liberation for Black people. To reach Tabitha, email hello@romper.com or follow her on Instagram.