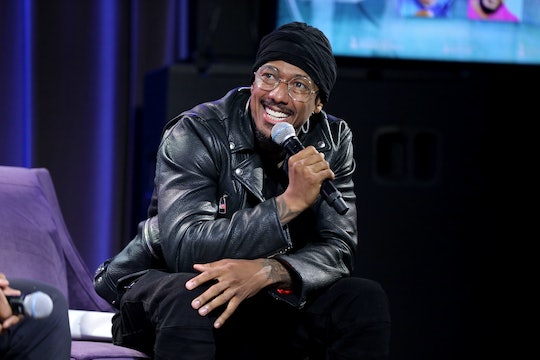 The happy announcement comes after some very difficult times for these committed co-parents.

When you’re a model like Alyssa Scott, even a pregnancy announcement on social media can look like it belongs inside the glossy pages of a fashion magazine. Scott was truly beaming from the inside out as she hopped onto Instagram and shared the joyful news that she is expecting another baby with Nick Canon and expanding the branches of his growing family tree. While Cannon has so far stayed mum on his social media, a pictures is worth a thousand words as he joined Scott for an intimate maternity shoot to celebrate the beautiful news.

Scott initially announced her pregnancy on Instagram last week with a picture of her growing bump and mini-me matching in turquoise blue. The model mom was really excited about her daughter Zeela becoming a big sister and wrote a sweet caption: “she comes up to my belly multiple times a day and says ‘do you know I love you little baby?!’”

Scott followed up with a second Instagram post where she looked equally as gorgeous. The glowing mama posted a solo maternity picture with some hot maternity fashion that would make Rihanna proud. She then shared her latest spree of three more snaps for the grid featuring photos that finally included the happy father. Scott was not shy about sharing her blessing as she posted intimate pictures in the tub with Cannon as well as artwork that recreated the moment.

“This is a MIRACLE & a BLESSING,” Scott captioned one of her posts.

Cannon and Scott have been through a lot together. It has been nearly one year since they experienced the tragic loss of their baby Zen, who passed away from brain cancer at only 5 months old. Scott opened up about the “unbearable grief” that she experienced and penned a loving tribute to his memory on Instagram. “You kept me going. It would be the middle of the night and you would smile at me. A surge of energy would fill my body and pure joy would radiate from within me. We were a team, both determined to see it through. It feels unbearable running without you now,” Scott wrote.

So far Cannon hasn’t made any official announcements on any of his social media channels, but he will likely share the news soon. The Masked Singer host has been very active on Instagram, posting pictures of the recent Fall fun he is having with his children on the beach or at a pumpkin patch.

Of course lots of people have a lot of opinions on Cannon and his decision to father so many children. But for now, let’s try to put any side-eye aside and just be happy for a couple who went through the unthinkable, and are now lucky enough to be pregnant again.

This article was originally published on Oct. 27, 2022