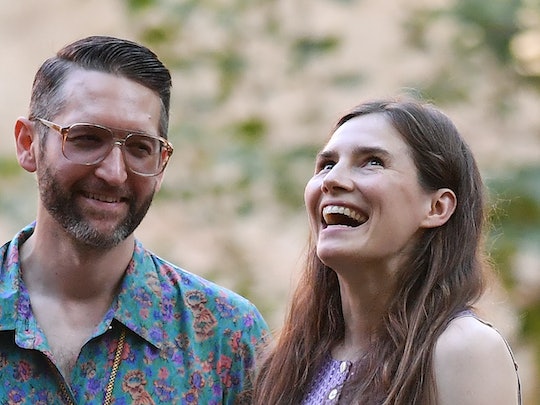 The criminal justice activist suffered a miscarriage earlier this year.

A few months after experiencing a heartbreaking miscarriage, Amanda Knox has a reason to celebrate: she’s pregnant. The 34-year-old author and criminal justice activist revealed she was expecting her first child with husband Christopher Robinson in a recent episode of her podcast Labyrinths.

“Oh, thank goodness! Yay, we did it!” Knox exclaimed excitedly in an audio clip recorded while she and Robinson await the results of a pregnancy test and played at the end of her podcast’s most recent episode, Infertility Part 5: A Global Crisis.

“We’re pregnant!” Knox and Robinson said, before revealing that they’ve been documenting their pregnancy experience “from day one” with plans to take Labyrinths listeners on “an intimate journey from conception to birth.” Knox became something of a household name when, at 20, she was wrongfully convicted of the 2007 murder of her roommate Meredith Kercher while studying abroad in Italy. After a lengthy rollercoaster of an appeals process, Knox was acquitted in 2015.

In the first episode of their podcast’s current mini-series on infertility, which dropped July 7, Knox and Robinson revealed they’d suffered a miscarriage fairly early in her pregnancy earlier this year. The couple, who were legally married in 2018, said they were excited to quickly become pregnant shortly after Knox had her IUD removed. “We were already getting the baby room set up,” Knox said, adding that she and Robinson began painting a mural in the room they’d selected to be their nursery. “We were nesting hard,” she added.

But at Knox’s first ultrasound appointment, which the couple said they scheduled for what they thought was her eighth week of pregnancy, health care providers couldn’t find a fetal heartbeat. “We went back in a week later,” Knox said. “And it hadn’t grown. It didn’t have a heartbeat.”

Knox said she was initially confused by the news. “I thought, ‘Why would there be a dead baby just hanging out in there? If it wasn’t viable, why wasn’t it going away?’” Knox said. “My body didn’t even know, and that felt weird to me… I didn’t know that you could have a missed miscarriage.”

The Mayo Clinic defines a missed miscarriage as a miscarriage in which placental and embryonic tissues remain inside the uterus despite the fact the embryo has died or never fully formed. The American College of Obstetricians and Gynecologists (ACOG) has estimated early pregnancy loss like what Knox experienced happens in roughly 10% of known pregnancies but that most people ultimately go on to have successful pregnancies as repeated pregnancy loss is rare.

But as Knox and Robinson have discussed, the relative rarity of a second miscarriage doesn’t make the first loss easier to bear. “We’ve been trying not to blame ourselves on this journey to become pregnant,” Robinson said in the couple’s most recent podcast episode. “It hasn’t always been easy.”

“But you keep going,” Knox added. “You try again.”

More Like This
Can You Bowl While Pregnant? Experts Weigh In
Considering Getting A Tattoo While Pregnant? Here’s What To Know
What You Need To Know About Eating Burrata During Pregnancy
Post Malone Just Revealed He's Welcomed His First Child AND He's Engaged!