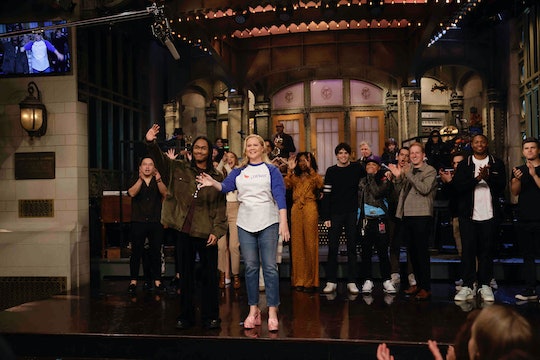 “This was the hardest week of my life.”

Comedian Amy Schumer hosted Saturday Night Live for the third time, and her first since becoming a mother to her son, Gene, in 2019. But while she joked about the fact that motherhood has changed her needs as a host in a promo — handing over a rider that included bejeweled goblets, tequila, and cigarettes “all for the baby” — mom duties did, indeed, make this a different experience from her previous stints in 2015 and 2018. In a post on Instagram, Schumer shared that on Thursday, just two days before the live show on Nov. 5, she had to rush her son to the ER where Gene was hospitalized with RSV. It seems that no matter how famous you are, parents cannot escape juggling child care emergencies and work.

“This was the hardest week of my life,” she wrote in an Instagram post on Sunday. “I missed Thursday rehearsals when my son was rushed to ER and admitted for RSV. Shout out to all the parents going though this right now.”

Cases of RSV, a common respiratory infection, appear to be on the rise across the country, a trend that has been noted by the Centers for Disease Control and Prevention (CDC). Most cases are mild and include symptoms like runny nose, decreased appetite, fussiness in babies, and/or a cough. According to the CDC, almost all children will have an RSV infection by the time they turn 2. However, while generally mild, the agency warns, it can be dangerous or even life-threatening for some, particularly babies and the elderly. The disease can easily cause bronchitis and pneumonia. The CDC estimates that one to two of every 100 children under 6 months (and about 58,000 kids under 5) who get RSV may require hospitalization for oxygen, intubation, or ventilation as a result of the virus.

While RSV is often most active in the colder, winter months, NPR reports that doctors began noticing unseasonable upticks as early as this past summer. Unfortunately, cases of RSV (and, as such, hospitalizations associated with the illness) are currently on the rise. Children’s hospitals from Connecticut to Washington state have noted “unprecedented” case numbers for this time of year. Dr. Jeanne Marrazzo, director of the division of infectious diseases at the University of Alabama, Birmingham, warned Here and Now’s Celeste Headlee of a “tripledemic” as the U.S. heads into winter, observing active spread of Covid-19, the flu, and RSV.

Schumer reported that, like most children with RSV, Gene is “home and better.” It seems that, no matter what the job, handling a sick child is easier with understanding co-workers. On Instagram, Schumer praised the “beautiful humans” at SNL for their support and thanked both the cast and crew of SNL who “couldn’t have been more supportive.”

“Lorne has assembled the most talented people with the kindest hearts,” she concluded. “Thank you everyone there and to the doctors and nurses who helped us.”

More Like This
Jinger Duggar Was Taught Motherhood Defined Her — & Then She Broke Free
Exclusive: Watch How A Group Of Princesses Save The Day In Netflix's New Animated Series
When Does 'Yellowstone' Season 5 Come To Peacock? Not Soon Enough
10 Parenting Lessons We Learned From Red & Kitty In 'That '70s Show'
What Parents Are Talking About — Delivered Straight To Your Inbox