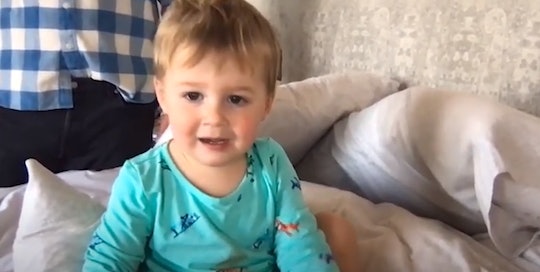 He’s already such a little activist.

In an effort to encourage people to exercise their right to vote, Amy Schumer included her son Gene as a “bribe” in a voting PSA video. The comedian is clearly carrying on the tradition of political activism with her sweet little boy, and if she wants to bribe people with footage of the 22-month-old being adorable in order to get out the vote, we’re all for it.

Schumer made a video for Represent US, an group of independents, progressives, and conservatives working together to “pass powerful state and local laws that fix our broken elections and stop political bribery.” Somewhat ironically, the Trainwreck actress used bribery in a video supporting the passage of the For The People Act, a bill introduced in January to expand voting rights and change campaign financing rules to stop political corruption, but it was bribery done with her son Gene she used “because of how important this issue is.”

“They are trying to pass 250 laws in almost all 50 states,” Schumer explained, “to try to make it harder to vote.”

In an effort to curtail this “voter suppression,” Schumer endorsed the For The People Act, which “makes sure that all voting machines are made right here in the U.S.” and that elections cannot be stolen by politicians. "The short version is that the For the People Act is awesome,” Schumer explained, “unless you hate democracy, and I know that you don't, you love democracy, I love you.” She also noted that supporting the right to vote is “not a partisan thing,” and it’s really more about “sticking it to political corruption.”

Gene made a cameo in Amy Schumer’s voting PSA video.

Finally, at the end of the video the I Feel Pretty actress makes good on her bribe and walks to find Gene, saying “this is fully not cool and if you judge me for this, that’s fine.”

Gene is playing on a bed, babbling away. Schumer says, “do you like the For The People Act?” and he answers “Yeah.”

No big surprise there, Gene has been a little activist for some time now. At less than 2 years old, Schumer and her chef husband Chris Fischer took their son to Black Lives Matter protests on Martha’s Vineyard last summer. And of course, he was inside his mom’s belly when she was arrested for protesting Justice Brett Kavanaugh’s appointment to the Supreme Court in 2018.

Making a brief appearance at the end of a voting rights PSA to endorse the For The People Act is par for the course for little Gene. All in a day’s work as the son of a political activist.