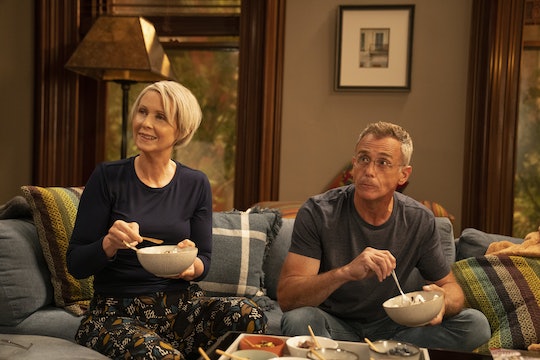 Steve's Hearing Loss In And Just Like That...Was Actually Inspired By Real Life

In Episode 7 of And Just Like That... on HBO Max, Miranda Hobbes runs into her professor Dr. Nya Wallace at a local market. Nya introduces her husband Andre to Miranda, and then Miranda’s husband Steve Brady comes over to meet everyone. He is clearly struggling with the market, disconcerted with vendors who have changed location and even leaving his wallet behind at one spot. The problem is, Steve is having trouble with his hearing. And it turns out this is very true to life for the actor who plays the character, David Eigenberg.

In an interview with Vanity Fair, And Just Like That... writers Julie Rottenberg and Elisa Zuritsky explained that Steve’s partial deafness was inspired by Eigenberg’s own hearing loss. “When [showrunner] Michael Patrick [King] reconnected with David Eigenberg about the show, the very first thing that David said was, ‘I got hearing aids.’ It was literally what he led with,” Zuritsky said. “That actually wound up being Steve’s tone about his aging [in the show].”

Nearly 10% of people between the age of 45 and 54 suffer disabling hearing loss, according to the National Institute of Deafness, and that number goes up as people age. Steve’s hearing loss is a super relatable storyline on the show; perhaps the only thing fans aren’t bothered by when it comes to his character.

There has been a bit of an outcry online over Steve’s character arc on the show; Miranda is having an unapologetic affair with Carrie’s boss Che Diaz with seemingly barely a thought for her husband of more than a decade. Steve appears to be befuddled much of the time, and whether or not this is attributed to his hearing loss is anyone’s guess. “Not a fan of most of the decisions on And Just Like That…,” wrote one social media user, “but I really hate what’s happened to Steve.”

Another noted that one of the storylines of the 2008 Sex and the City movie was Miranda’s reaction to Steve having an affair and it’s like that’s been forgotten. “I HATE AND JUST LIKE THAT FOR TRYING TO GASLIGHT US INTO BEING OKAY WITH MIRANDA CHEATING ON STEVE ARE YOU KIDDING ME IT'S LIKE THEY WEREN'T THERE FOR THE MOVIE.”

As the series progresses, hopefully the writers will give Steve Brady a little justice and stop treating him like he’s 100 years old instead of simply a middle-aged man with some hearing loss.