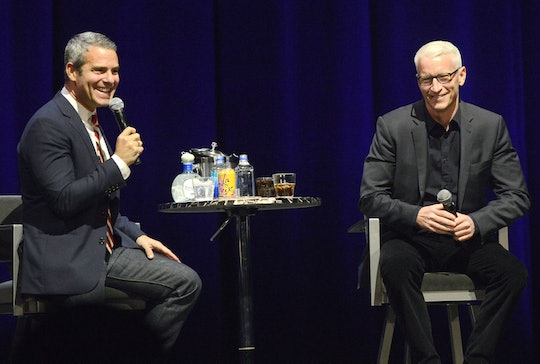 “This is not how we used to spend our Saturdays.”

Andy Cohen and Anderson Cooper’s weekends look a little different now that they have kids. They still enjoy late nights and wild parties, but most of the time these involve over-tired toddlers and shrieking kids instead of boozy nights out with friends — and parents can totally relate.

“Saturday Funday!” the Watch What Happens Live! host posted to Instagram on Oct. 8, along with a selfie video of him and Cooper. In it, the two men are standing in front of a bookcase, as chaos ensues. All you can hear in the background is screaming kids.

Cooper, who is holding his 8-month-old son Sebastian, nods. And Cohen says, “Just a mellow Saturday.”

“This is not how we used to spend our Saturdays,” the CNN news anchor, who is also dad to Wyatt, 2, responds.

Even their drinking is more responsible now, as Cooper asks Cohen, “What are you drinking there?” And Cohen answers, “Water!”

“Wow, Saturday, we’re getting our party on. This is awesome,” the Bravo TV personality continues. “Remember when we used to be guys around town?” Cooper responds by holding a stuffed animal up to the camera.

Sure, parents still dance the night away, but this time with crying babies that need settling. They still have wild nights that end in throw-up — but not from drinking too much. And they still have chaotic, energetic Saturdays, but with toddlers instead of young adults. It’s wild how fast things change, right?

Other parents could relate. Khloe Kardashian, mom of True, 4, and a newborn son born in August 2022 with Tristan Thompson, commented, “😂😂😂😂😂😂.” She definitely understands the struggle!

“The crazy thing is, you'll miss these days ❤️❤️❤️,” one parent commented.

Another wrote, “Nothing better than having a few good friends over ❤️ Ben, Lucy, Sebastian, and Wyatt are gonna be the most amazing friend group!”

At least they’re in it together. Last month, Cohen tried to vent to Cooper about the challenges of raising kids while on a walk, but the All There Is podcast host hilariously couldn’t relate.

“So, Anderson,” Cohen says in an Instagram video posted Sept. 6, before detailing the issues his kids were going through at the moment.

“I’m dealing with major mood swings and irrational temper tantrums,” Cohen says, as Ben is repeating “Wyatt” over and over. “What are you dealing with these days?”

“I don’t know. My kids are pretty great,” he says, as Wyatt sits contentedly on his dad’s shoulders.

As Sebastian and Lucy get older, things are only going to get more and more chaotic. Hopefully, Cohen and Cooper continue to document it all for tired parents to enjoy with them. The laughs make it all worth it.