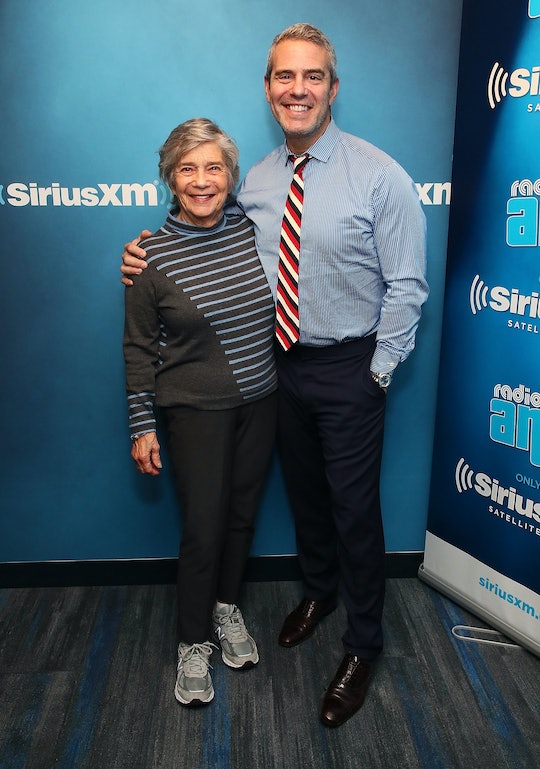 “We both started crying, and it was very emotional.”

Andy Cohen clearly got his sharp sense of humor from his mom Evelyn. No offense to him, but she might even be funnier than the Watch What Happens Live host, and that’s really saying something. Take, for instance, the story of how she reacted when he came out to her in the ‘80s. It was an emotional time for them both, but Evelyn Cohen really knew how to cut through the emotions with a bit of levity. And honesty. And, most importantly, unwavering support.

Cohen grew up in a suburb of St. Louis, Missouri, the only son of Evelyn and Lou Cohen, before going on to become a journalism student at Boston University from 1986 to 1990. Around the same time, Cohen came out as gay to his friends and family. And his mom.

“It definitely brought us closer," Cohen told People, explaining how the story unfolded. “She'd found a letter I wrote to someone in which I expressed my fear about telling more people I was gay. She thinks I left it out on purpose so she would find it. She confronted me about it, and I told her I was gay. We both started crying, and it was very emotional. But moments later she said, ‘I probably would've hated your wife anyway.’ It was so funny and so true."

Andy Cohen’s mom had a great reaction to his coming out.

Evelyn says that day was “the time she was most proud” of her son in their chat with People, telling him, “When you were on TV you became somewhat of a role model for people that were at home and were in the closet and were afraid to come out. So I was very proud of that.”

Cohen, who is dad to 2-year-old son Ben, is pretty proud of his mom too. So much so that he wrote a book called Glitter All Day: 365 Quotes From Women I Love, inspired by her forthright nature. Evelyn, it seems, is quite well known for speaking her mind. Even when it comes to how Cohen is raising son Ben. Back in 2020, he told Khloé Kardashian that she was not impressed with how frequently he posted pictures of his son on social media, per Page Six. “My mom is getting on me. She’s saying I’m posting too much of Ben. She’s like, ‘You can’t do this, he didn’t choose this.’”

We should all be so lucky to have a relationship like Andy and Evelyn Cohen. Even when she’s sassy, she sounds like a lot of fun.