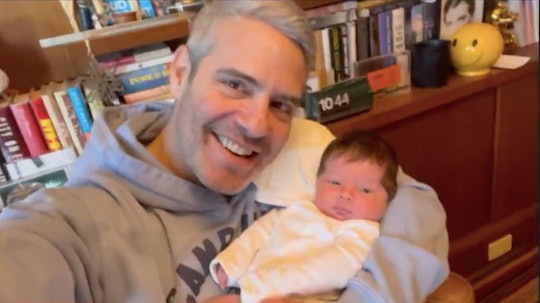 The same night that Lucy made her television debut!

Andy Cohen is absolutely loving his new role as a dad of two. The talk show host welcomed baby girl Lucy to his sweet little family on April 29, making his 3-year-old son Ben a big brother. Ever since becoming a dad, Cohen has been over the moon with gratitude. For his little boy, for his baby girl, for the fans who have sent him lovely messages of support. And perhaps most of all, to the surrogate who carried his little girl. A woman Cohen calls his “partner and friend” and who has become an integral part of his life. So much so that she’s even been in the audience of Watch What Happens Live.

Cohen returned to his Bravo series for the first time since Lucy’s birth, and made a point of thanking his supporters. “I was so moved by all of your love and support," Cohen told the audience. “I see all of your messages. I want you to know that your virtual cheerleading of my starting a family on my own has lifted me up when I most needed it.”

He also shared his appreciation for the surrogate who carried Lucy. “I have to once again thank my incredible surrogate,” he said. “What a partner and friend she has been to me.”

Not just a friend but also a big supporter. “She was in the front row right here on the set of Watch What Happens Live of the last show we taped, two days before Lucy was born. I thought we were going to have a real Clubhouse baby right here!”

Cohen pointed out that he was especially happy that she was able to carry and deliver his daughter in New York State, where surrogacy is legal and offers surrogates get “all the rights and protections that they so strongly deserve.” Those rights include the right to make all health and welfare decisions for their own body and their pregnancy, including consent for multiple embryo transfers, C-sections, and the decision to continue or end their pregnancy.

The proud dad did more than shout out the surrogate who carried Lucy during his first show back. He also introduced his little girl to the world with her television debut (please note her gorgeous, gorgeous hair). He rocked his daughter in his arms, crooned to her, and asked her to say hi to the audience. Naturally she just stared because she’s, well, a baby.

A surrogate who is a friend and a baby who is already a television star. Life is looking pretty good for Andy Cohen.