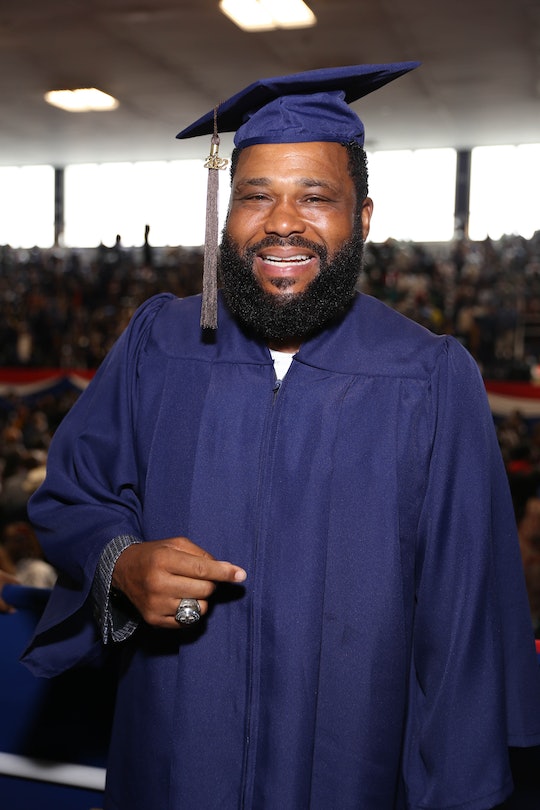 The Black-ish star is officially an HBCU graduate!

Anthony Anderson is officially a graduate! On Sunday, at 51 years old, the Black-ish star graduated from Howard University with a Bachelor of Fine Arts degree from the Chadwick A. Boseman College of Fine Arts and thanked his son for inspiring him to go back to school.

“To quote Biggie, 'IT WAS ALL A DREAM!,’” Anderson wrote on his Instagram. “Words can't begin to describe the emotional roller coaster I'm on right now. It's literally been 30 years in the making. This spring I was finally able to complete the work to graduate from Howard University with a BFA degree from the Chadwick A Boseman College of Fine Arts! Yesterday was a full circle moment. It's never too late! Things happen when they're supposed to happen!”

But what made the moment extra special was that he got to share it with his son, Nathan Anderson, who also attends HU. Anderson credited his son for inspiring him to go back to school.

“Thank you to my son @hotboynato for inspiring me to return to school to finish my degree after he was accepted into Howard University,” Anderson wrote at the end of his lengthy, celebratory post. “This is just the beginning!”

The pair actually visited the historically Black university in Washington, D.C. back in 2017.

Nathan supported and congratulated his dad on his Instagram. “Mood,” he captioned a group selfie post of his dad. In 2018, Anderson shared his plans to return to school after dropping out when he was younger due to financial challenges.

“I was paying for college myself, and I ran out of money after my junior year,” he told Jimmy Fallon in a 2018 interview. “I’ve been speaking with the university and Dr. Frederick, who’s the president of the university, about creating a curriculum that I can take online and at home and do some practical classes on campus so I can walk with my son in 2022. So I have four years to finish one year of college.”

Earlier this year, the 51-year-old revealed on The Real that he was only 15 credits away from graduating. Anderson now joins the legacy of other notable Bison alumni such as Phylicia Rashad, Taraji P. Henson, and the late Chadwick Boseman.

More Like This
This Mom Gave Birth On Graduation Day, So The University Brought Her Degree To Her
Travis Scott Is Passionate About HBCU Education & Put $1 Million Towards It
Quinta Brunson Is Giving Back To The School That Helped Inspire Abbott Elementary
Karamo Brown Teamed Up With His Son On A New Children’s Book To Share A Powerful Message