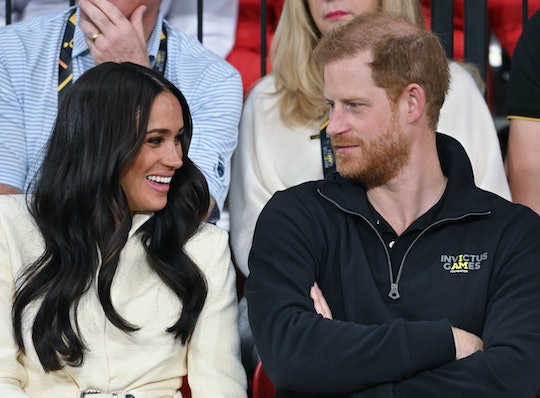 “I give him the most honest answer that I can and then it goes on and on and on until he’s satisfied.”

Prince Harry may have been born to royal duties and obligations, but he seems to have found his true purpose in fatherhood... even if he doesn’t always have all the answers for his son Archie, who has reached a peak toddler phase. The Why Stage.

In a new interview with TODAY’s Show Hoda Kotb, Prince Harry opened up about what he loves about being a dad. “The chaos, the learning, the reminder of just every element of yourself, your soul,” the Duke of Sussex told Kotb about what he loves most about fatherhood. “When you’re not a parent you can get yourself into all types of different stuff and maybe sometimes you forget who you are.”

Another reason? The inquisitiveness of a toddler, like his son Archie Harrison Mountbatten-Windsor, who has officially reached the “I must question everything” phase, as all toddlers inevitably do.

“Archie, at the age he’s at, asking all the questions, those questions of the why. He’s into the ‘why’ stage, why this, why that, why that,” Harry said about his nearly 3-year-old son with Meghan Markle.

The Duke of Sussex said that he uses those “why” moments as opportunities to have real conversations with Archie. “Instead of just trying to move it on, I give him the most honest answer that I can and then it goes on and on and on until he’s satisfied,” Harry continued. “And then that’s it, it’s done.”

“I love it, I love every part of it,” he added. “I always wanted to be a dad, I always wanted to have my own kids and now I got two little people that I am responsible for,” referring to Archie and their daughter, Lilibet “Lili” Diana Mountbatten-Windsor.

The Duke and Duchess of Sussex traveled to the Netherlands for the 2022 Invictus Games. The inaugural games were founded by Prince Harry and first held in London in 2014. Last month, while across the pond, the couple met with his grandmother Queen Elizabeth for the first time in two years.

Archie seems to be growing up safely and privately before our very eyes and already has some career aspirations. “When I talk to my son Archie about what he wants to be when he grows up, some days it’s an astronaut, other days it’s a pilot — a helicopter pilot obviously,” the Duke of Sussex, who was an Apache helicopter pilot while serving in the UK military, said in a speech at the beginning of the Invictus Games.

No word yet on what Lilibet wants to be when she grows up. The 10-month-old is still too young to decide, of course, but she’s already on the move trying to keep up with her big brother.