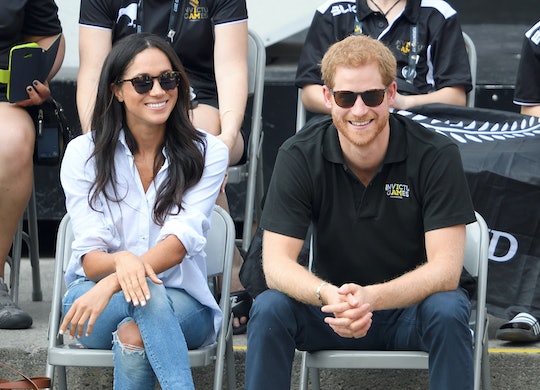 He twinned with his mom.

Just two days before Christmas, Meghan Markle and Prince Harry gave their devoted fans the gift they’ve been waiting for since at least June: a family photo. The first photo of 6-month-old daughter Lilibet, which was exciting in and of itself. And also the first photo of 2-year-old son Archie’s face since his mom read him a book in a video for his first birthday. The little boy looks just like his dad with his red wavy hair and precocious smile, but he definitely inherited his mom’s fashion sense. After all, he was basically wearing one of her signature looks from 2017, and it holds up.

The Duke and Duchess of Sussex posed in the yard of their Montecito, California home earlier this year for photographer Alexi Lubomirski, who had previously photographed the couple when they got engaged in 2017. The entire family went for a relaxed look, with Meghan, Harry, and Archie in jeans and little Lilibet, born in June, wearing a sweet pink dress.

There was something very familiar about Archie’s look in the Sussex holiday card, however. The 2-year-old wore a loose fitting white button down shirt with faded jeans. Just like the outfit his mom wore to the Invictus Games in Toronto, Canada in 2017.

Meghan’s appearance with Prince Harry was something of a big moment for the couple at the time. It was the first time they stepped out as an official couple after dating in relative privacy. Meghan was an actress working on Suits back then, a newcomer to the royal family. Looking cool in her loose white shirt and faded jeans. Just like the little boy she is raising four years later. How time flies.

Now all Archie needs is to add a French tuck and a chic pair of sunglasses, and he is truly his mother’s fashion heir.

This isn’t the first time Meghan has had a cute twinning moment with her little boy. Back in May she popped up in a cameo for Prince Harry’s AppleTV+ documentary The Me You Can’t See wearing a “Raising The Future” t-shirt. Archie had a matching “The Future” onesie which was gifted to him during their royal visit to South Africa in 2019.

Archie and Lilibet are fortunate in so many ways. They have parents who love them and prioritize them. They get to live private lives. And their mother is a true fashion icon ready to pass along her greatest style tips. Blessings all around.