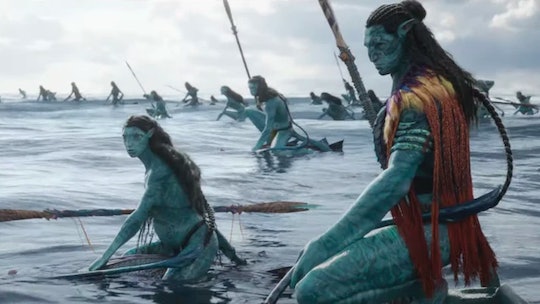 Sully and Ney’tiri have made a family together in Avatar: The Way of Water.

A full 13 years have passed since James Cameron dropped his mind-bending epic Avatar on the world, which feels impossible to imagine. More than a full decade since we first were introduced to the super tall, supernatural Na’vi people of Pandora, and we haven’t heard a word from them since. Until now. Avatar: The Way of Water is coming to theaters in the fairly near future, and here’s everything we know so far.

Avatar: The Way of Water picks up where the first movie left off.

In the 2009 Avatar film, Jake Sully and Ney’tiri made the decision to become a couple despite the fact that he is actually a human who was sent to spy on the Na’vi. By the end of the film, Sully switches sides and protects the Na’vi from evil humans out to steal the unobtanium from Pandora’s rich soil. In the new film, Sully and Ney’tiri have made a family together and are forced to battle an ancient threat in the outer reaches of the planet of Pandora.

The first trailer for Avatar: The Way of Water sees Jake Sully (Sam Worthington) return with his partner Ney’tiri (Zoe Saldaña) to explore the sea and sky and forests of Pandora. While there was little plot revealed in the trailer, a new group of reef-dwelling people called the Metkayina are introduced and there does appear to be a threat in the forest from another species. But never fear, because Jake Sully reassured Ney’tiri by telling her, “Wherever we go, our family is our fortress.”

Avatar: The Way of Water is the first of four planned sequels.

Director James Cameron told Entertainment Weekly that Avatar: The Way of Water is the first of four planned sequels to the original Avatar movie. He began writing this movie, much of which will be set underwater, in 2012, and plans to release three more sequels meant to stretch across the entire geography of Pandora. Hopefully they won’t all take 13 years to complete as this movie has done.

Avatar: The Way of Water will premiere just in time for the holidays.

What is it rated?

While no rating has been announced for Avatar: The Way of Water, the original Avatar film was rated PG-13 for language, warfare violence, sensuality, and smoking. So it seems likely the new film will probably be at least a PG-rated adventure.

Where to watch the original.

While you’re waiting for the new movie to come out, you can watch the original Avatar on Disney+. Just in case you need to bone up on all of your Na’vi trivia.

More Like This
'Hocus Pocus 2' Officially Has A Release Date To Look Forward To
Lyle, Lyle, Crocodile Is Heading To The Big Screen As A Musical Comedy
Emma Thompson Shotputs A Child As Miss Trunchbull In The Matilda Musical Trailer
Exclusive Eureka! Clip Introduces Star Of Disney’s New STEAM Preschool Series