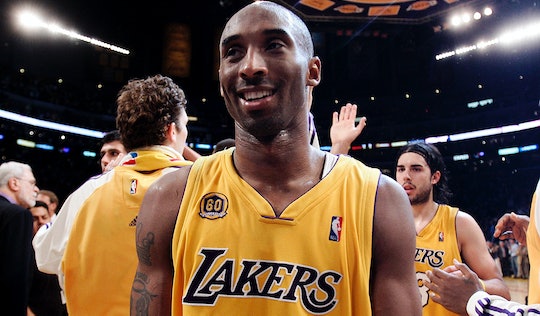 Kobe Bryant’s unexpected death in January 2020 was an enormous loss to many people. To his family, his friends, his fans, his team. Of course, the Los Angeles Lakers felt that loss and continue to feel that loss to this day. Which is why they have honored his memory in the sweetest way possible. Babies born on Kobe Bryant Day, Aug. 24, are considered “Lakers for life” by the NBA team, and it’s a lovely tribute to a legendary basketball player who put such stock in his role as a dad to four daughters himself.

Kobe Bryant Day was established in 2020 after the NBA superstar died in a helicopter crash along with eight others, including his 13-year-old daughter Gianna. The day of remembrance falls on Aug. 24, with eight and 24 representing his two numbers as a Los Angeles Laker.

In honor of the “Black Mamba,” the Lakers have decided to make every baby born at UCLA Hospital on Aug. 23 or Aug. 24 a “Laker for life,” gifting the newborns with #8 beanies, Lakers swaddle blankets, and three adult #24 Kobe t-shirts.

The gesture also included a “Welcome to the world” certificate from the Lakers with a message for new parents and new baby reading, “On this special day, we want to honor Kobe Bryant and celebrate you. Kobe loved his family, and so this Kobe Day we are giving you and your family three Mamba t-shirts; two for your loved ones and one for you to grow into someday. Lakers family is for life.”

Bryant was a man who took great pride not just in his amazing basketball career but also his family. He and his wife Vanessa Bryant were parents to four girls, 18-year-old Natalia, 4-year-old Bianka, and 2-year-old Capri along with Gianna, and he once admitted to ESPN’s Elle Duncan about how he would have happily had “five more” daughters if it were possible because he just loved being a girl dad.

Sadly, Bryant died before he could see his daughters grow and thrive. This tribute to him by the Lakers is just so perfect. It embodies the man as a basketball superstar and a proud dad. It will keep his memory alive for future generations. Little ones who are born on Kobe Bryant Day will be Lakers for life.