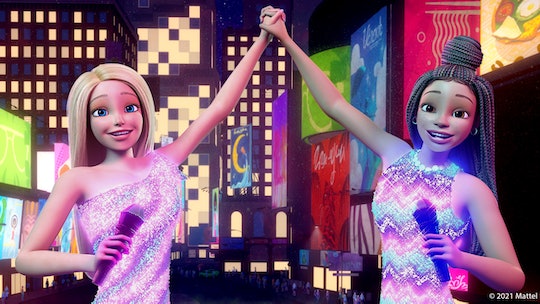 Mattel and Netflix's upcoming movie musical will feature double the fun with a brand new Barbie!

It seems that Barbara Millicent Roberts, aka Barbie, has done everything there is to do. She’s been a fashion model, a teacher, a doctor, an astronaut, and even president. But soon, she’s on to her next adventure! On Sept. 1, Barbie: Big City, Big Dreams will premiere on Netflix, with new adventures, songs, lessons, friends, and even a new Barbie! Don’t worry, OG Barbie isn’t going anywhere, and as you can see in Romper’s exclusive look at Barbie: Big City, Big Dreams, she’s just as fabulous as ever.

Barbie Roberts of Malibu is thrilled when she is accepted into a prestigious summer program at the Handler School for the Performing Arts in New York City. There she makes a new friend who just so happens to also be named Barbie Roberts! (To avoid confusion, they give one another nicknames based on their hometowns: Malibu and Brooklyn.) In addition to sharing a name, both girls share a dream — to make it on Broadway — and getting the Spotlight Solo in the program’s show is the perfect first step. The friends have some valuable lessons to learn about determination, the benefits of healthy competition and, of course, the value of friendship.

Barbie: Big City, Big Dreams is the latest original film from Mattel Television, which boasts 36 television specials over 20 years and a (genuinely very cool) Barbie YouTube channel, among others. Big City, Big Dreams will feature new choreography and a companion soundtrack — available today for digital download and on streaming services — with songs written by Alison McDonald, Matthew Tishler and Andrew Underberg that underscore the movie’s themes of perseverance, hard work, and finding multiple paths to success. And, of course, Mattel will complement the special with a new line of dolls and play sets based on the movie.

In Romper’s exclusive clip, the Barbies meet new friend Rafa — an aspiring costume designer — and his muse, a perro named Gato. (Yes: a dog named “Cat” because “the only labels we believe in are designer.”)

“Barbie’s brand message about inspiring the limitless potential in every child resonates with kids and parents alike,” Fred Soulie, senior vice president and general manager of Mattel Television, said in a statement. “More than a cultural icon, she has emerged as a relatable character and role model, and we look forward to continuing to share her journey with the world.”

Co-writer and executive producer Christopher Keenan agrees. “We have barely scratched the surface of the stories we can tell for Barbie and her friends,” he said, “and we look forward to weaving them through the Barbie content universe.”