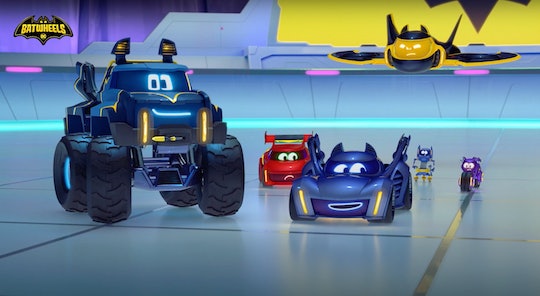 Batman and Robin may be the dynamic duo, but Gotham City wouldn’t be safe without the superhero’s trusted Batmobile! Car-obsessed kids will love Cartoonito’s new Batwheels preschool series, all about the automobiles behind the superheroes. Romper has an exclusive look at this adorable new series, which premieres this month on Cartoon Network’s Cartoonito and HBO Max. Zoom through the exciting details, below!

Just in time for your kid to change his mind about a Halloween costume, Batwheels premieres during Cartoon Network’s Cartoonito preschool block at 9 a.m. on Oct. 17, then it will be available for streaming on HBO Max on Oct. 18. The first seven episodes will be available right away.

“Little ones and their families will ride along with an amazing team of super-vehicles — Bam (the Batmobile), Bibi (the Batgirl Cycle), Redbird (Robin’s racecar), Buff (the Bat-Truck), and Batwing (the Bat-plane) — as they help Batman, Batgirl, and Robin keep the streets of Gotham City safe. Whether it’s facing down the Legion of Zoom or one of Gotham City’s notorious Super-Villains, the Batwheels will use their incredible gadgets and creative teamwork to save the day,” the show’s logline reads.

Michael G. Stern, co-executive producer of Batwheels, tells Romper that they wanted to keep Batman “cool” while still feeling relatable to kids, which is why they came up with the Batwheels.

“Our approach to adapting Batman for such a young audience was to keep him the same cool crimefighter we all know and love. We didn’t want to dumb the character down or make a ‘kidified’ version of Batman,” he says. “We wanted to present Batman in all his awesomeness. To accomplish this, we created a team of new characters — The Batwheels — that are essentially kids. The audience sees the stories through their eyes (or headlights, if you will!), while preserving the cool of Batman.”

He adds that their version of Gotham City is kid-ified. “We wanted to include all the familiar, beloved institutions — the Batcave, Gotham City, etc.,” Stern tells Romper. “But our version is just a little more colorful, and a little more vehicle-leaning, with an abundance of ramps, bridges, tunnels, and jumps. In other words, it’s Gotham City done fun!”

Kids will learn to be heroes.

“Batwheels inspires children to understand and embrace what it means to be a hero and models ways to overcome challenges that also contribute to the greater good,” Dr. Laura Brown, educational psychologist and curriculum director of Cartoonito at Warner Bros. Discovery, tells Romper.

“The Batwheels are known for their super speed and gadgetry, but it’s their character strengths — qualities like concern for others, resilience, self-awareness and teamwork — that are key to their success,” she continues. “By watching Batwheels, kids see they, too, can develop character strengths and be heroes to their family, friends and community.”

She explains that each story in the series shows kids how a certain character strength can help the Batwheels overcome challenges. For example, Bam gives himself an upgrade so he can better help Batman, but he learns that his inner qualities were all he really needed. “In this story, Bam is developing the character strength of authenticity as he realizes and embraces the value of his personal qualities,” Dr. Brown says.

“The Batwheels, like our audience, are heroes in training. They want to do the right thing and help Batman, Robin, Batgirl and the community, but they are still figuring out how to be good friends, work together and lead as heroes,” adds Dr. Brown. “In this way, the Batwheels are the perfect vehicles (pun intended!) to show kids what a real hero does and that we all can become heroes.”

Romper has an exclusive clip of Batwheels.

Watch Batwheels on Oct. 17 on Cartoonito and on Oct. 18 on HBO Max.

More Like This
Watch An Exclusive Sneak Peek At 'The Amazing Maurice'
Exclusive: Watch How A Group Of Princesses Save The Day In Netflix's New Animated Series
Jinger Duggar Was Taught Motherhood Defined Her — & Then She Broke Free
Freeze! The Single From The New 'Bluey' Album Just Dropped
What Parents Are Talking About — Delivered Straight To Your Inbox