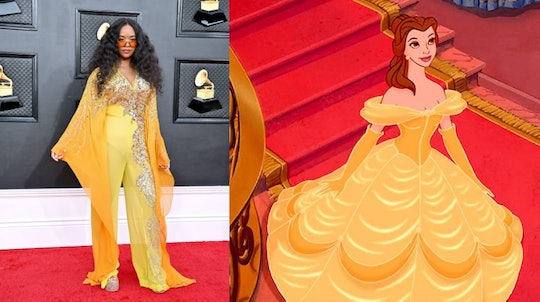 H.E.R Is Becoming A Disney Princess As Belle In New Beauty & The Beast TV Special

“The world will see a Black and Filipino Belle!”

H.E.R. is joining the Disney princess family! The Grammy Award winning singer-songwriter will play Belle in ABC’s upcoming live-action and animated special, Beauty and the Beast: A 30th Celebration. The special’s premiere date is still months away, but here’s what you need to know.

H.E.R., whose real name is Gabriella Sarmiento Wilson, will be the first Afro Filipina woman to play the classic Disney princess on-screen, according to Deadline. “I can’t believe I get to be a part of the Beauty and the Beast legacy. The world will see a Black and Filipino Belle!,” she said in a statement to Deadline.

H.E.R’s timeless appearance follows another #blackgirlmagic casting from under the sea. Halle Bailey has made history as the first Black Ariel in Disney’s upcoming live-action adaptation of The Little Mermaid, which will premiere in theaters May 26, 2023.

ABC’s Beauty and the Beast special mixes live-action with animation.

Entertainment Weekly describes the 30th anniversary special as “a blend of animated and live-action sequences, paying tribute to the beloved film and its legacy by combining the film itself with new musical performances.”

The special will be executive produced by Jon M. Chu, whose best known for his work on the 2018 comedy, Crazy Rich Asians and In the Heights. It will be directed by Hamish Hamilton, who directed this year’s Emmy, Grammy, and Superbowl halftime shows. H.E.R. is also a producer of the production.

The special pays homage to a timeless tale.

“I have always wanted to be a Disney princess, and I get to work with two wonderful directors Hamish Hamilton and my favorite, Jon M. Chu,” H.E.R. told Deadline. “It is very surreal and I couldn’t be more grateful.”

The production is set to pay homage to the timeless Disney movie with new costumes and sets and never-before-seen live performances. This year marks the 30th anniversary of Beauty and the Beast, which first premiered in theaters in 1991. In 1992, the movie became the first animated film to be nominated for the Oscar for best picture and ended up winning two Oscars. Actress Emma Watson first brought Belle to live-action in the 2017 remake of the movie.

“With her obvious extraordinary talent and stage presence, H.E.R. is the perfect embodiment of our Belle and we are thrilled for audiences to see her in this celebration of creativity,” Chu said in a statement to Deadline. “We were both influenced as storytellers by the original animated movie, so it’s very exciting to collaborate together to honor the artistry of that timeless classic while also inspiring a whole new generation of creators.”

The special airs in December 2022.

ABC’s Beauty and the Beast anniversary special will be taped in front of a live audience at Disney Studios and then it will air on ABC on Dec. 15. Don’t worry if you miss the airing, it will be available to stream on Disney+ the following day.