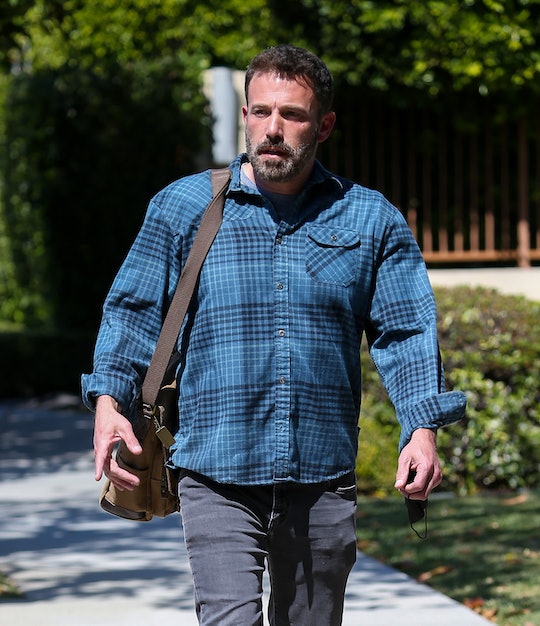 Luckily, everyone is OK.

Kids driving cars is one of those milestones many parents dread (right up there with learning how to throw tantrums and starting to date). Over the weekend, Ben Affleck’s recent experience being a parent of an eager little driver ended with a bang — literally! — as his 10-year-old son Samuel Garner Affleck drove a yellow Lamborghini right into another car.

Samuel, whom Affleck shares with ex Jennifer Garner, went to the Beverly Hills luxury car rental dealership called 777 Exotics with Affleck’s fiancé Jennifer Lopez on Sunday, when Affleck let his son get into the driver seat of the car, according to TMZ. He put the car into reverse and backed into a white BMW, making contact with the passenger side of his car and the front wheel of the BMW.

Affleck looks frustrated in the pictures from TMZ, and, honestly, who can blame him? At least everyone was OK!

“There was no damage. Everyone is okay,” a representative for Affleck told People after the event. An insider revealed more details about the mishap.

“Ben was at the dealership to test drive a new car.... Sam seemed very interested in the exotic cars,” a source told People. “Ben let him get into the driver's seat of a very expensive Lamborghini, [and] the car ended up reversing into another parked car. There seemed to be no damage to the cars though.”

They added, “You could tell that Ben very much regretted letting Sam get into the driver's seat. He seemed upset about it."

The Last Duel star already has one child of driving age, Violet, 16, as well as Seraphina Rose Elizabeth, 13, with Garner. However, it seems like his son will be the one he has to worry about the most when it comes time for drivers’ ed.

J. Lo, who shares twins Emme and Max, 14, with ex Marc Anthony, recently posted a tribute to Affleck for Father’s Day. “Happy Father’s Day to the most caring, loving, affectionate, consistent and selfless Daddy ever,” the Marry Me star captioned a video posted to Instagram.

In 2020, the Argo star opened up about Samuel’s obsession with Star Wars on Jimmy Kimmel Live. “My son knows that I do movies that are kind of fake, and his mom does movies, and that's all pretend,” Affleck said, “but he also knows that Star Wars is real. He knows there's guys out there fighting the emperor and that job needs to get done.” So when he appeared in The Last Duel with Adam Driver, who played Kylo Ren, Samuel was confused. “I told him, ‘I'm actually in this movie with Kylo Ren,’ and his mind opened in two,” Affleck revealed in the interview. “He was like, ‘But Dad! But how? How do you know Kylo? Are you going to space? Will he have his lightsaber?’”

So cute! Maybe Samuel should stick to flying X-wings instead of Lamborghinis — at least until he’s had some formal training.