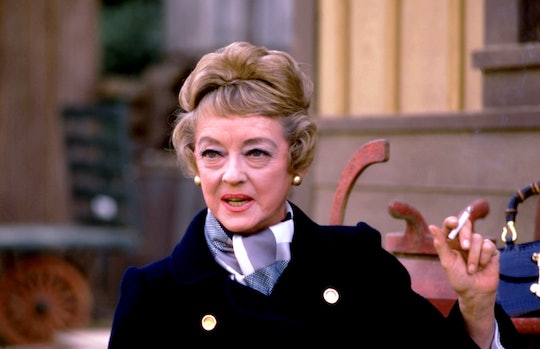 Where Is Margot Merrill Now? Bette Davis' Daughter Didn't Live With Her

Merrill was briefly mentioned in the series Feud: Bette and Joan.

Bette Davis was the mother to three children, though the 2017 miniseries by Ryan Murphy, Feud: Bette and Joan — chronicling the rivalry between legendary actresses Bette Davis and Joan Crawford — didn’t delve deeply into her relationships with all her kids. In the show, her eldest daughter, B.D., received the most screen time, and her son, Michael, never appeared at all. However, Davis’ youngest daughter, Margot, did briefly come up when Davis explained her family situation to her co-star Crawford in the series. Margot didn't live with her mother, instead spending her childhood in institutions where she could receive care that Davis could not provide herself. But where is the daughter of Bette Davis, Margot Merrill, now?

Born in 1951, Margot Merrill is still alive today. She was adopted by Davis and her fourth husband Gary Merrill shortly after she was born. Though she was a happy baby, by the time she was three years old, it became clear something was amiss. A trip to the doctor revealed that Margot was suffering from brain damage that must have occurred shortly after her birth. Though the family tried to take care of her themselves at first, Margot was eventually sent to a care facility called the Lochland School in Geneva, New York. That was where she remained for most of her life.

According to the Davis biography Dark Victory by Ed Sikov, Davis once said, "The most difficult day of my life was the day I was dressing Margot, three years old, in a sailor suit and a sailor hat [and told her] about the lovely school she was going to."

Though Margot was moved around throughout her life and had many visits home, she did not live with her mother again for any significant length of time. Davis wanted to bring Margot home once B.D. was married and Michael was away at school, but she didn't appear to be able to care for Margot on her own; their visits were allegedly often difficult and abruptly cut short. But in her memoir This 'N That, Davis painted a positive picture of her relationship with her younger daughter.

Margot is past thirty now. She has come home often, and our times together have been happy. On one of her birthdays, I took her to New York and pulled out all the stops — nightclubs, theaters, the works. Wherever we went I was asked for my autograph. In the car going back to the hotel, Margot said, 'Mummy, may I have your autograph?' Sometimes you laugh to keep from crying.

Davis removed Margot from Lochland in the 1960s and had her placed with several different families in Philadelphia before she finally settled at the Devereaux Foundation home in Santa Barbara. However, Margot was unhappy there, and the situation led to an argument between Davis and Margot’s adopted father, Merrill, who wanted her returned to Lochland. Davis supposedly said that he could take her there and pay for it if he wanted, which may have later led to Merrill accusing Davis of abandoning Margot, as reported in the book Bette and Joan: The Divine Feud by Shaun Considine.

Merrill did pay for Margot's care at Lochland until his death in 1990 and set up a trust to provide for her afterwards; it was managed by her brother, Michael Merrill. Davis did not include Margot or her older daughter B.D. in her will. Davis' reasons for doing so aren't clear, but Margot appears to have been well taken care of regardless. At the time of Dark Victory's publication in 2008, Margot was still living at Lochland. Her current situation is unclear, but it seems fair to assume that she continues to reside there now in her 70s.

This article was originally published on March 26, 2017