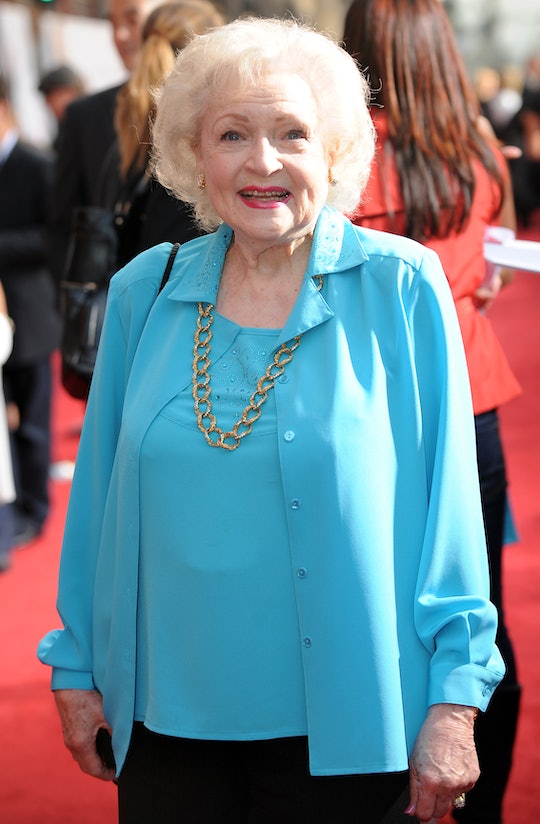 Betty White’s Three Stepchildren Have Made Her Feel “Blessed”

“We all had a very good time together.”

Betty White has been working in the entertainment business ever since 1930, when she was a plucky little 8-year-old playing an orphan on the radio show Empire Builders. Since then, she has managed to reinvent herself time after time at different stages of her career. From being a popular guest star on game shows in the ‘50s to becoming a household name on television series in the ‘70s and ‘80s to bona fide screen legend, what hasn’t Betty White done? She even became a stepmom to three children when she married her third husband in 1963.

The Proposal actress made a decision early on in her life that was probably considered somewhat radical at the time; she wanted to devote her time and energy to her career, and chose not to have children. A choice she told CBS News in 2012 that she stood by decades after the fact. “I've never regretted it,” she said. “I'm so compulsive about stuff, I know if I had ever gotten pregnant, of course, that would have been my whole focus. But I didn't choose to have children because I'm focused on my career. And I just don't think as compulsive as I am, that I could manage both.”

When Betty White was a guest on the popular game show Password in the early ‘60s, she met and fell in love with the host, Allen Ludden. The two married in 1963, and Ludden’s three children with wife Margaret McGloin, who had died of cancer in 1961, became White’s stepchildren. David, Martha, and Sarah Ludden were teenagers when their father remarried, and were in attendance at their civil ceremony in Las Vegas. The actress told her friend and co-star Sandra Bullock they were a blessing, per The List: “Betty said, 'You know what? I never had children biologically. I married someone who had three children. And how blessed I was to have those three stepchildren.’”

Staying Out Of The Spotlight

None of White’s three stepchildren went into show business. David Ludden became a professor of history at NYU, while Sarah and Martha have stayed under the radar completely. The actress protects their privacy by not discussing them in interviews, saying simply when asked about her stepchildren, “We all had a very good time together,” according to the Los Angeles Times.

Sadly, Ludden died in 1989, and White never married again. “When you've had the best, who needs the rest? It was special. It was very special,” she told CBS News in 2012.

Secret To A Long Life

As White prepares to turn 100 years old in January 2022, she is reflecting on the things that have made her happy in life. She told People that she feels “lucky to be in such good health,” and that she inherited her “cock-eyed optimism” from her mom. “I got it from my mom, and that never changed. I always find the positive.”

It certainly seems to be working for her.