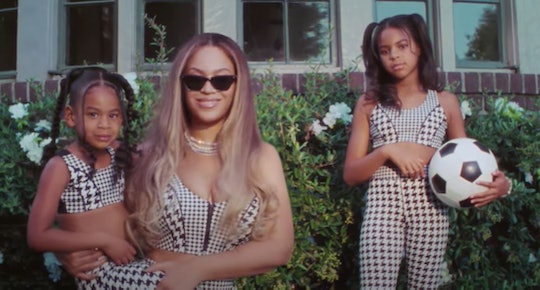 Look how big Rumi is getting!

Happy Holidays to the Beyhive! Beyoncé’s new Ivy Park x Adidas’ Halls of Ivy is officially out. The latest collection dropped on Adidas website on Dec. 10 and features 89 pieces for adults and 34 for kids with lots of patchworks, fur, twill, knit, and leather patterns. But all everyone can talk about are her two best models. The star’s daughters Blue Ivy and Rumi Carter both made appearances in their mother’s latest ad campaign for Ivy Park x Adidas’ Halls of Ivy collaborative collection and absolutely stole the show.

On Thursday, Beyoncé posted herself and the girls on her Instagram ahead of the launch. Beyoncé holds Rumi, 4, with her big sister, Blue, 9, posing in the background with a soccer ball. The girls are also featured in the campaign video, which dropped on Ivy Park’s Twitter and social media in late November. In both the video and the photos shared on Instagram, the 40-year-old mother of three matches her daughters in black-and-white checkered outfits. The girls are wearing two pieces, while Bey is rocking a one-piece.

“WELCOME TO THE HALLS OF IVY,” the caption read. This is the second time both sisters have appeared as a pair in Ivy Park ads. Rumi made her debut in her mother’s Ivy Park kids campaign, alongside her brother, Sir. As for Blue Ivy, she’s a veteran and has made several cameos with her mother, including a recent ad for Tiffany & Co.

Blue and Rumi aren’t the only celeb kids featured in the ad; Ryan Philippe and Reese Witherspoon's teens, Ava and Deacon, as well as Kobe and Vanessa Bryant’s daughter, Natalia, also make appearances. NBA stars James Harden and Jalen Green are also featured in the ad.

The Halls of Ivy is the fifth collection between Ivy Park and Adidas, since its debut last January. The collection will feature 89 pieces for adults and 34 for kids and will have lots of patchworks, fur, twill, knit, and leather patterns.

“[Hall of Ivy] firmly believes that the power of higher learning can also come from finding your own voice through self-expression, connecting with one another, and sharing space with like-minded people,” the companies released a joint statement to WWD. “Our design cues are based on this philosophy and present a collection of classic fashion silhouettes, infused with individual style, swagger, and the spirit of following your wildest dreams.”

This article was originally published on November 30, 2021