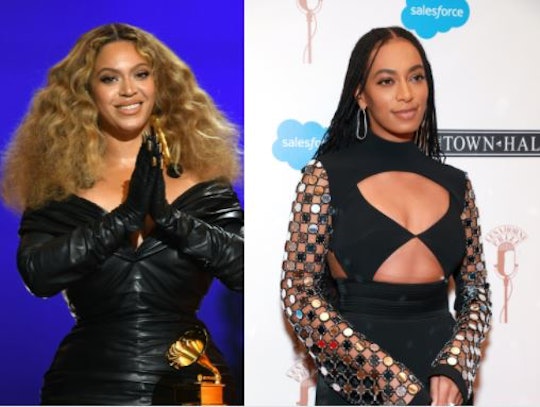 Inquiring minds want to know! Help us out Mama Tina!

It doesn’t matter how old you are, you’ll always be your mother’s baby. Just ask Tina Knowles-Lawson, Beyoncé’s mom who sweetly posted a throwback picture of one of her “beautiful” babies that has fans debating whether or not it’s Queen Bey or another dope Knowles woman, her sister Solange. The adorable little girl in the photo looks exactly like Blue Ivy, so either way, those Knowles genes are strong.

“Missing my beautiful baby this morning,” the 67-year-old mom of Beyoncé and Solange captioned the photo that she shared on her Instagram. “At Saint Mary’s looking like ‘I might look like a little Angel but I got something up my sleeve.’” She added a laughing and heart emoji at the end.

The plaid dress, white collared, black bowed photo of the Black Is King multi-Grammy-winning star or “Cranes In The Sky” singer has sparked quite the speculation. Even Ma Rainey star Viola Davis weighed in. “Wow!!!! I thought this was Blue,” Davis commented on the photo.

Meanwhile, some fans think the throwback pic Knowles-Lawson posted could be Bey’s younger sister, 34-year-old Solange, who recently released her film project, When I Get Home.

“I truly can’t tell if this is Solange or Beyoncé,” one fan wrote, while another said, “Blue looks just like her auntie [Solange].”

Neither Beyoncé nor Solange has settled the debate, but whoever it is, she sure looks a lot like JAY-Z and Beyoncé’s oldest daughter and Grammy winner, 9-year-old Blue Ivy. Along with her mom, Blue Ivy took home a Grammy for her part in the song “Brown Skin Girl.”

In the end, the debate on whether this picture is of Beyoncé or Solange can only be cleared up by Mama Tina herself. A day before sharing the school picture, she posted another throwback of the sisters, which she captioned, “Made me smile this morning.” So, you be the judge.