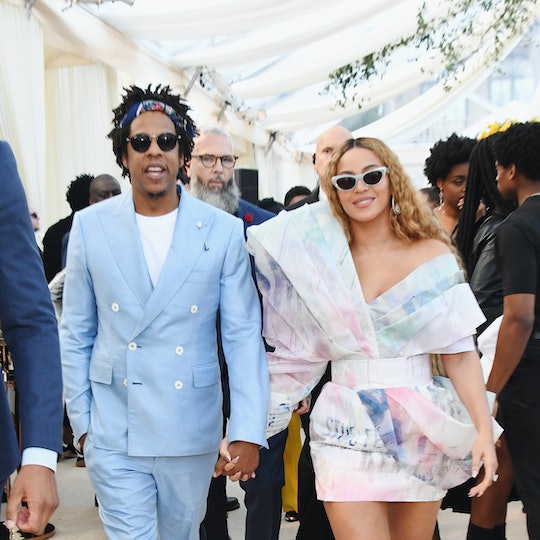 Beyoncé Shared A Rare Photo Of Her Twins, Blue Ivy, & JAY-Z Dressed As The Proud Family

Halloween isn’t over until Queen Bey says so, OK?

Beyoncé, JAY-Z, and their three kids went all out for Halloween this year! On Thursday, the Carters treated their fans to a rare family photo from their Halloween festivities in which they dressed up in costumes from the Disney Channel’s beloved animated show The Proud Family.

In the photo, Beyoncé had two roles: Suga Mama, complete with the curly, silver wig and bubblegum pink housecoat; and Trudy Proud, rocking a neon green blazer, with a marigold bustier and high-waisted brown trousers similar to the character. JAY-Z dressed up as Oscar Proud, complete with dark blue trousers and a white button-up shirt just like the Proud Snacks patriarch. Five-year-old twins Rumi and Sir were CeCe Proud and BeBe Proud, respectively, and Blue Ivy, of course, was Penny Proud with her signature pigtails and mole under her left eye.

“Family every single day and night,” Beyoncé captioned the family picture shared on Instagram a few days after Halloween.

Unsurprisingly, fans loved the photo. “Halloween is officially on NOV. 3rd,” one Beyhiver commented under the picture. Another wrote, “THE CARTERS GON EAT EVERY TIME!! WE GOT 2 BEYONCÉ’S IN ONE PIC! JAW DROPPED.”

Some fans humorously commented on Bey’s mom, Tina Knowles-Lawson, and how she could’ve stepped in to play Suga Mama. “Lmaoo now why didn't you just ask Ms. Tina to play grandma,” one person wrote. Another replied, “🔥❤️ But Mrs. Tina could’ve been Suga mama 😂😂😂.” Another added, “Ms. Tina coulda been Suga Mama and Mr. Lawson Papi! 🤣🤣.”

A tweet from the “Break My Soul” singer’s company, Parkwood Entertainment, is also getting a lot of traction from fans for nailing the anxiety the Beyhive is experiencing waiting for music videos from Beyoncé’s latest studio album, Renaissance, to be released.

The Carter family’s Halloween photo isn’t the only snapshot to go viral recently. Last week, Beyoncé uploaded glamorous pictures of her, JAY-Z, Blue Ivy, Tina Knowles-Lawson, and her husband Richard Lawson from the Wearable Art Gala in Los Angeles, in which the 10-year-old placed an $85,000 bid on a pair of her mother’s Lorraine Schwartz diamond earrings.

It’s safe to say, the show is also watched and loved by Bey, Jay, and the kids!