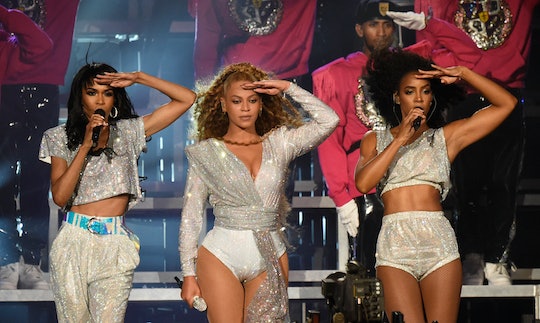 “They were able to see Noah come into the world. It was beautiful.”

Never doubt the sisterhood of Kelly Rowland and Beyoncé. The Destiny's Child alums and longtime besties are so close that Queen Bey made sure she was there for Rowland when she gave birth to her second child earlier this year. Distance and pandemic be damned!

During a recent interview on PEOPLE (The TV Show!), 40-year-old Rowland revealed that Beyoncé was on a Zoom call with her when she gave birth to her son, Noah Jon. The "Black Magic" singer and her husband, Tim Weatherspoon, welcomed their second son to the world on Jan. 21, joining their 6-year-old son Titan.

Rowland didn’t reveal any specific details about the Zoom call, but we can only imagine the joy of having Bey telling you to “push” and offering words of support between contractions. But what Rowland did share was that she remembered the moment as a beautiful one. “We had our family join on Zoom," she said during her appearance on PEOPLE (The TV Show!). “They were able to see Noah come into the world. It was beautiful.”

Also on the virtual reunion was another sister-friend and former Destiny’s Child member, Michelle Williams, as well as Beyoncé’s mom, Tina Knowles-Lawson (who is also like a mother to Rowland) and her husband’s mother. Rowland added that Williams and the Black Is King superstar are both “awesome, awesome, awesome, awesome” aunts to Noah.

Rowland and Bey’s bond extends way beyond Destiny’s Child. The two have been friends since they were kids. And they both created a close bond with Williams when she joined the group in 2000, after original bandmates, LaTavia Roberson and LeToya Luckett left.

When they came to visit the newborn in February, the meeting was a heart-gushing one for the new mom of two.

“Being able to share space with Michelle and Bey is truly a gift," Rowland told Entertainment Tonight in a virtual interview on Feb.17. “It's really a gift because we've known each other for so long and the industry doesn’t really make friendships... It's the nature of it, and we still have each other after all these years... And I'm just so grateful for them and they are a highlight of my life.”