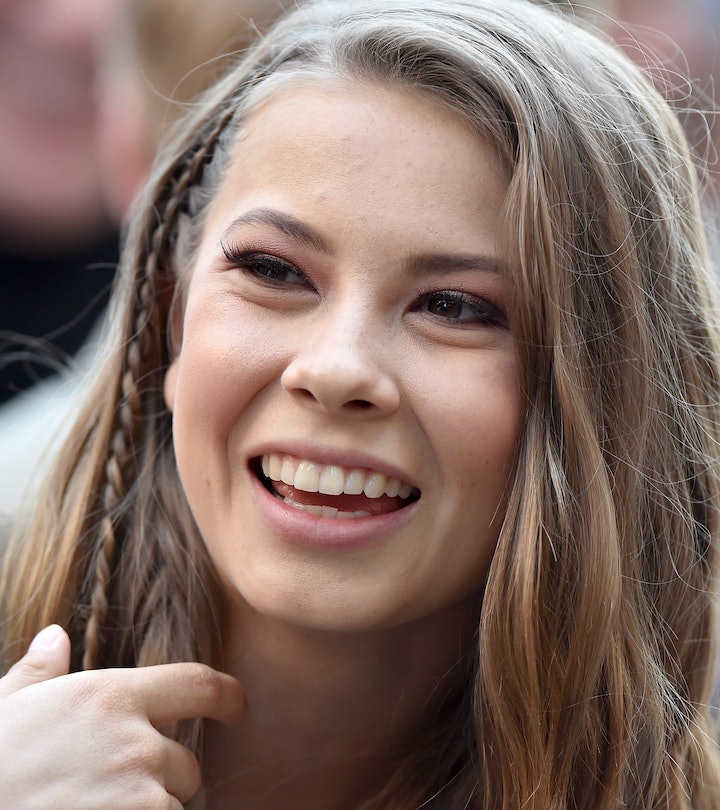 Hunting crocodiles may not be part of Grace Warrior’s official Australia Zoo duties (yet!), but that doesn’t stop the 18-month-old from admiring them — just like her late grandfather Steve Irwin. In fact, Bindi Irwin tells Romper that her daughter has a croc-inspired ritual whenever she spots pictures of The Crocodile Hunter.

“We call my dad ‘Grandpa Crocodile’ with Grace,” Irwin shares, which might actually be the cutest grandparent’s name, ever. But what Grace does upon seeing a stray picture or old footage of Steve is super adorable too. “Every time she sees a photo or video of him, she says ‘snap, snap’ and makes the little snapping hand gesture like a crocodile,” she adds.

Irwin, who shares Grace with husband Chandler Powell, also revealed that one of her daughter’s favorite activities is watching her late grandfather with a crocodile. “She loves the photos or footage of him feeding crocodiles. She gets so excited when Grandpa Crocodile is WITH a crocodile,” Irwin says. Crocs were kind of his thing, so it’s only natural Grace loves watching him in his element.

The Crikey! It’s the Irwins star often posts about her daughter on Instagram, including an adorable video in July when Grace was “visiting Grandpa Crocodile” at the Tasmanian devil habitat. Construction signs with Steve Irwin’s picture were posted, and little Grace looks so delighted when she sees them, waving and babbling away. It’s such a natural reaction, you can just tell Bindi, her grandma Terri, and her uncle Robert are all doing a phenomenal job of keeping his memory alive.

In another move that would make her dad proud, Irwin is encouraging Grace and other young girls around the world to be changemakers. That’s why she wrote the foreword for Good Night Stories for Rebel Girls: 100 Inspiring Changemakers, which debuted Oct. 4. This book celebrates barrier-breaking activists, artists, inventors, and entrepreneurs under the age of 30, who are leading the next generation of girls to change the world.

Rebel Girls is a global, multi-platform empowerment brand “dedicated to helping raise the most inspired and confident generation of girls through content, experiences, products, and community.”

This brand has sold more than 8 million books in 49 languages and reached 18 million digital audio listens. They are on the New York Times bestseller list, have received a 2022 Apple Design Award for Social Impact, have multiple Webby Awards for family and kids and education, and have been honored as a Common Sense Media Selection and iHeart Media Podcast nomination among many others.

At the heart of the organization is a desire to empower kids through entertaining, colorful bedtime stories collected in one easy-to-read format.

The fifth volume of the award-winning series features stories about Taylor Swift, Greta Thunberg, Zendaya, and many more inspiring women. Through its partnership with Room to Read, a global non-profit organization whose mission is to create a world free from illiteracy and gender inequality, 100 Inspiring Changemakers will also include stories of four Girls’ Education Program participants from countries including Sri Lanka, Nepal, India, and Vietnam. Rebel Girls and Room to Read are also collaborating on a localized, proprietary mini edition of Young Changemakers to reach girls in an additional nine languages and six countries.

“This book highlights so many extraordinary individuals who are making a difference in the world,” Irwin tells Romper. “I hope these empowering stories are a reminder to believe in your strength to change the world. No matter what your journey is in life, you can be a changemaker.”

In addition to writing the heartwarming foreword, Irwin has her own goodnight story in the book. It’s complete with an illustrated picture of the conservationist, where she’s been drawn in her Australia Zoo khakis, petting a tiger with a parrot on her shoulder. She’s completely at home in the wild!

Irwin hopes that this book will complement the lessons she and her family are teaching Grace at home about wildlife conservation and the basics of being a good-hearted human.

“Grace is only 18 months old, but we believe that inspiring empathy and kindness starts at the very beginning of your life,” she tells Romper. “We want to build a positive foundation for Grace and encourage her to appreciate our precious planet from an early age.”

“We are giving her the opportunity to spend time in nature and travel to extraordinary conservation destinations as family.” This strategy is working, as Irwin says Grace “is like a little sponge and soaks up the energy from people around her and the environments she spends time in.”

“My hope is that leading by example will one day give her the tools she needs to be a changemaker.”