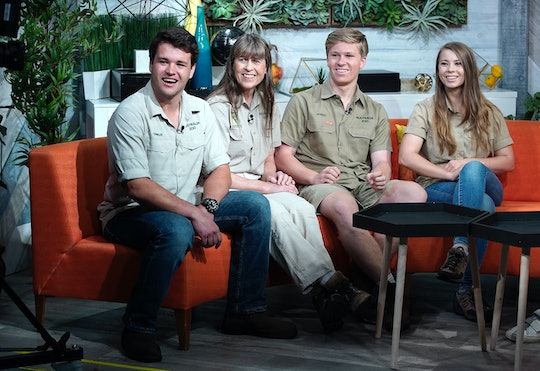 “I understand nothing,” said the great Michael Scott in The Office — and probably 19-month-old Grace Warrior, too. After all, Bindi Irwin’s daughter was dressed as the “World’s Best Boss” for Halloween, but what exactly does that mean? Why are people afraid of how much they love her? And is that her favorite toy in Jell-O?! Just kidding, of course. Chandler-Powell-as-Jim-Halpert would never prank his daughter like that, although, a silly Robert-Irwin-as-Dwight-Schrute might do something extra ridiculous. For her part, Irwin dressed as the adorably cute Pam Beasley, complete with a cat costume and a Dundie Award. And yes, the Irwins have officially won Halloween this year!

“Our boss is making us work late again, lucky she’s so cute,” Irwin captioned a post on Instagram today. “(Swipe for our World’s Best Boss) Happy Halloween from #TheOffice.”

While fans around the world were busy dressing up like The Crocodile Hunter (still a classic costume to honor the late Steve Irwin!), the Irwins were dressing up like the most hilarious workplace comedy, ever. Irwin was all in black, with cat ears and whiskers drawn on, channeling her inner Pam (played by Jenna Fischer) from Season 2, Episode 5, “Halloween.” Her husband, Powell, wore black pants and a white button-down shirt with three circles on the side to be Three Hole Punch Jim, which is the same costume Jim (played by John Krasinski) wore in the episode (at least until one of the circles fell off, and then he was Two Hole Punch Jim).

In that episode, Dwight (played by Rainn Wilson) dressed up as a Sith Lord from Star Wars, but Irwin’s brother Robert kept in simple in a Dwight costume, complete with mustard yellow shirt, hair parted down the middle, and glasses. He’s sitting on top of a cabinet eating fruit.

In the next photo, “Dwight” is pretending to put out a fire, while “Jim” looks at the camera with his classic smirk. It’s spot-on! Of course, Grace is the cutest boss in the world. The toddler is in one picture with a “World’s Best Boss” t-shirt on, just like the famous mug Michael (played by Steve Carell) uses. She is obviously the star as she eyes the camera with a sweet little smirk and holds up a toy in a leader pose. Michael would be proud, no doubt.

Irwin also shared a video to her Instagram Stories of Grace in her Michael Scott costume, and she looks adorable as always. She’s playing with an orange cone and makes the cutest face when she drops her toy through the hole on top.

Another said, “Grace’s facial expression as the boss is so perfect 🤣.”

“That’s a boss I’d actually be happy to work for ❤️,” someone else commented. So true! Except if she wakes them up in the middle of the night to “clock-in,” that’s the worst.

Earlier this month, Irwin told Romper that she and Powell are raising Grace to be kind. “Grace is only 18 months old, but we believe that inspiring empathy and kindness starts at the very beginning of your life,” she shared. “We want to build a positive foundation for Grace and encourage her to appreciate our precious planet from an early age.”

With a little kindness and a thorough knowledge of The Office, Grace is going to be a well-rounded little girl!