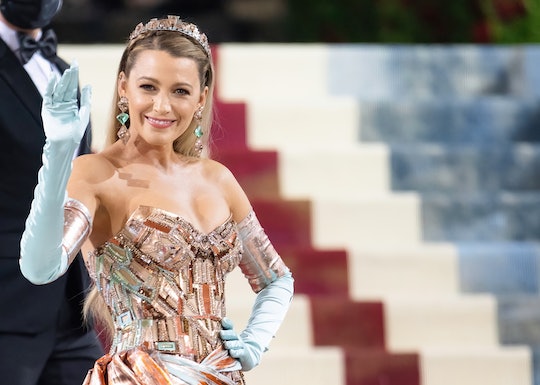 Take note: all moms want a little alone time for their birthday.

Disneyland is the happiest place on Earth — and you know what makes it even more magical? Leaving the kids at home! Listen, kids are great. Wonderful, in fact. And taking them to an amusement park for 8-12 hours in the middle of summer is great, too, of course. But you have to be prepared for over-heated, over-stimulated, over-sugared meltdowns and a day that inevitably ends with carrying over-tired toddlers (and sometimes older kids) on your back. In pure Leo energy, mom of three Blake Lively decided to skip all that and go to Disneyland without her kids for her birthday — and she, unsurprisingly, had a blast!

“Find me a happier place on earth to start my birthday celebrations early. 💖 I’ll wait…” the Gossip Girl star captioned a post on Instagram yesterday. Lively turns 35 on Aug. 25, and went to Disneyland with her sister Robyn Lively. Her three kids, James, 7, Inez, 5, and Betty, 2, whom she shares with husband Ryan Reynolds, were nowhere to be seen.

The first picture in the carousel is a selfie in front of the pink castle. In the next, The Rhythm Section actress strikes a pose with Princess Jasmine from Aladdin. Another picture is a selfie in front of Stormtroopers, as Lively makes a worried face. It’s easy to get into the true Disney spirit when you don’t have little ones to apply sunscreen to or take potty for the fifth time.

The Betty Buzz founder also took a selfie with Jessie from Toy Story and a selfie with her sister in front of the Mickey Mouse rollercoaster at Disney’s California Adventure. She also posted pictures of various parts of the parks, including pots of “hunny” from Winnie-The-Pooh, and a picture of the magical candle from Encanto.

The last shot sums up her entire trip — it’s a selfie of Lively with the biggest grin on her face. She’s smiling so big you can see it in her eyes as the sun shines down on her. She’s literally glowing, and it’s probably at least in part due to the fact that she’s on a much-deserved kidless vacation. It’s the ultimate gift for any mom.

Reynolds has previously joked about going to Disneyland alone. In a viral Tweet on Jan. 30, 2017, the Deadpool star wrote, “Went to Disneyland because my daughter's obsessed with Mickey Mouse. She was so excited when I got home and told her.”

At the time, Lively shared with Glamour that her husband was just kidding. “He may as well work for the Enquirer,” she said. “When he says ‘my daughter,’ he’s never, ever talking about her. Everything is a completely made-up scenario. He’ll run them by me sometimes just to make me laugh. But oh, I’m so in love with him when he writes that stuff. I mean, I’m in love with him most of the time, but especially with that.”

But now that her kids are older, Reynolds’ idea maybe doesn’t seem so bad. A weekend at Disney with your sister, pretending to be a princess, and embracing a childlike joy (something you can’t always do with the kids) — it sounds like a birthday dream. Lively can take the kids next time, but every mom deserves a chance to be free without worrying about anyone else for a while.