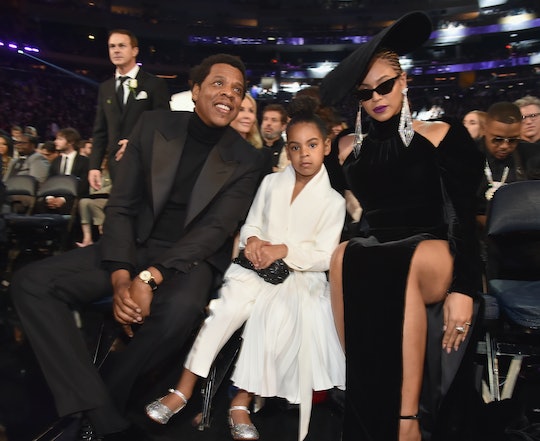 Blue Ivy Bid Over $80,000 For A Pair Of Diamond Earrings That Used To Belong To Beyoncé

Beyoncé and JAY-Z’s oldest daughter threw down some heavy cash, for a good cause!

One thing you can count on Blue Ivy to do is show up and show out! The eldest daughter of Beyoncé and JAY-Z got into a bidding war at the 2022 Wearable Art Gala over a pair of diamond Lorraine Schwartz earrings on Saturday and was ready to throw down some serious cash for them.

Indeed, the 10-year-old bid over $80,000 for the pair of earrings, but was ultimately outbid by Mielle Organics founder Monique Rodriguez, who purchased them for $105,000. Rodriguez shared a video of the bidding war between her husband and Blue on her Instagram. “My husband is very competitive 🤣🤣 especially when it comes down to his wife!!!,” she captioned the video.

Keke Palmer and Blue’s grandmother, Tina Knowles-Lawson, who is the co-founder of the gala (along with her husband, Richard Lawson) and honorary chair, led the auction. At one point in Rodriguez’s video, you can see Mama T give her granddaughter a cute, side look when she held up her sign but she had her parent's supervision and permission to participate. Abbott Elementary’s Quinta Brunson also documented the moment in her Instagram Story, according to Pop Crave, and can he heard saying “[Blue’s] so rich!”

The pair of earrings Blue Ivy was bidding on actually previously belonged to her mother, according to People. Speaking of mom, Beyoncé dazzled in a custom, strapless Gucci mermaid gown and a Dolce & Gabbana clutch at the gala.

This isn’t the first time Blue Ivy was one of the highest bidders in the room. At the 2018 Wearable Art Gala, she offered up $19,000 for an acrylic painting of a young Sidney Poitier but was outbid by Tyler Perry who purchased the painting for $20,000. But she did manage to win a $10,000 bid for a 36” x 36” piece of art composed of deconstructed law books from Indiana and medical books from California, created by artist Samuel Levi Jones.

But the auction is about more than bragging rights over exquisite earrings and art pieces. The gala invites and honors the Black elite of Hollywood, beauty, and arts. It benefits WACO’s artistic and youth mentorship programs through a fine art auction and is largely inspired by the Black excellence of the Harlem Renaissance era.

“I grew up with a mentor that I met when I was 14 and she changed the trajectory of my life by exposing me to the arts and to life in general, so I always wanted to have a community center where kids could come and meet with visual artists and performing artists and just have a place to hang out,” Knowles-Lawson told The Hollywood Reporter while speaking about the gala and her WACO Theater Center she founded with her husband. “Also, when my kids were little there were two community centers in Houston that I used to take them to, where they really honed their skills and their performing confidence. So I know that it really changes kids’ lives when they have a place like that.”

Needless to say, when Blue Ivy spends, she is doing so for a good cause!