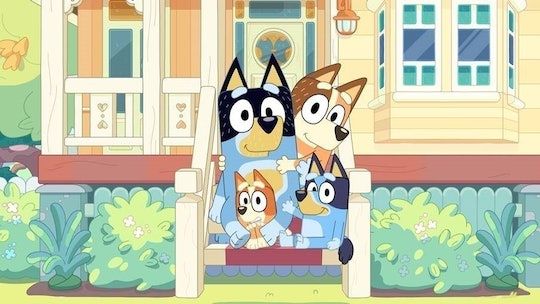 The first half of Bluey Season 3 premieres Aug. 10 on Disney+!

Wackadoo! There’s only one more day until Bluey Season 3 premieres in the U.S. on Disney+. Kids (and parents too, obviously) are in for more hilarious moments, new characters, and tons of heartfelt stories about Bluey, Bingo, Mum, Dad, and their friends and family. Ahead of the release date on Aug. 10, Romper has some exclusive speak peek images from Season 3 below.

The Emmy Award-winning Bluey was created and written by Joe Brumm and produced by Ludo Studio for the Australian Broadcasting Corporation and BBC Studios. Season 3 will be split into two parts. The first part will feature 25 seven-minute stories — perfect length of time to capture a toddler’s attention or allow for just one more episode, please! — that “will bring even more hilariously relatable everyday moments of family life to audiences everywhere,” according to a press release. These episodes will premiere on Disney+ on Aug. 10 and will be aired on Disney Channel and Disney Junior later this year in territories around the world.

The second half of Season 3 will be available on Disney+, Disney Channel, and Disney Junior at a later date.

It was already revealed that Bluey Season 3 will include new friends and locations, as 6-year-old Bluey, 4-year-old Bingo, and their parents Bandit and Chilli depict the “usual and unexpected occurrences of everyday family life” in funny and heartfelt home-based stories.

In the first exclusive image, Bluey and Mum are cuddled up on the couch reading a book together. What a sweet mother-daughter bonding moment!

In the next, Bandit is lying on the floor on his side, while Bingo pulls at his arm and Bluey seems to cheer her on from his feet. It looks like a fun new game that kids are definitely going to want to play with their parents!

In the third image, Bluey is playing outside with her friends, Jack, Rusty, and Coco. They look like they’re playing another game, with everyone donning backpacks and Rusty and Jack holding walking sticks (even though Jack’s is definitely a broom). It’s going to be so much fun to see their new adventures!

Season 3 of Bluey is already airing in Australia, where it has performed 2.3x above time slot average audience (total audience) with the new episodes achieving 14 of the top 20 broadcasts on free-to-air TV in 2021.

While you wait for the first half of Season 3 to premiere on Aug. 10, you can stream the first two seasons of Bluey on Disney+ right now.