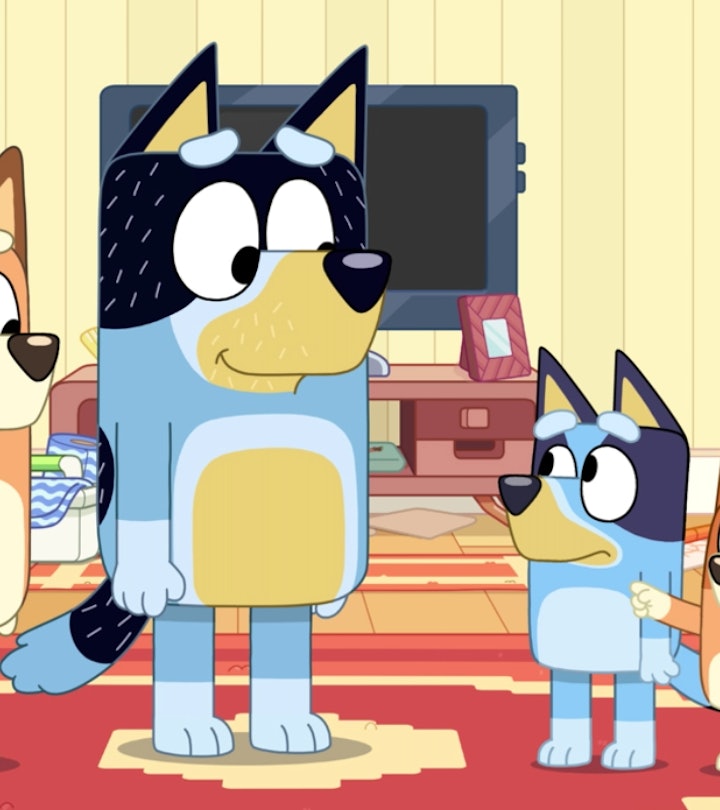 For Real Life!? More Bluey Is Coming, But Season 4 Could Be A While

Unless you were born yesterday — and even then! — chances are, you know and love Bluey. That’s because the Emmy-winning Australian kids’ show is heartfelt and hilarious. (And parents love it even more than Bluey and Bingo love making Mum and Dad play Dance Mode!) Since watching the first 27 episodes of Bluey Season 3 on repeat since it premiered on Disney+ on Aug. 10, you may be wondering: will there be a Bluey Season 4? Here’s everything we know so far about a potential Season 4, and it’s possible release date in the U.S.

Will there be a Bluey Season 4?

After the Daily Mail Australia reported in May 2022 that Bluey is ending, which reportedly came from inside sources close to Ludo Studio in Brisbane where Bluey is produced, the creators of Bluey released a statement to refute the claims.

“Some of you have spotted some online speculation on the future of #Bluey,” they wrote on Twitter at the time. “We absolutely love the show and there are no plans to end it. The community of fans around the world continue to blow us away and if we ever had an update on Bluey’s future you’d hear it from us first.”

A spokesperson for Ludo told Daily Mail Australia, “We’re very excited about the future of Bluey, which is now a huge global success, and there’s certainly much more to come.”

They haven’t specifically announced a Season 4 yet, but they have assured fans more Bluey is coming.

When will Bluey Season 4 premiere?

Hold your biscuits, Bluey fans! We are still waiting on the second half of Bluey Season 3 to premiere.

The 27, 7-minute episodes of Bluey Season 3 streaming on Disney+ right now make up most of the season. Additional episodes of Season 3 will premiere on Disney+, Disney Channel, and Disney Junior at a later date that has not been revealed yet. Whether they will drop all at once – as most did in August 2022 – or trickle in a little at a time, as the latest two episodes on Disney+ did, remains to be seen.

While previous seasons clock in at slightly more than 50 episodes, Decider reports that Season 3 is shorter. In Australia, all 37 main episodes have aired, with a Christmas-themed episode (in the grand tradition of “Verandah Santa” and “Christmas Swim”) that premiered on Dec. 24.

What summer-y Christmas shenanigans will the Heelers get up to this time?

Once all the episodes have aired in Australia, creator Joe Brumm along with Ludo Studios, ABC, and BBC Studios will start planning Season 4 of Bluey.

“We always finish a season before planning the next one and right now we’re halfway through series three and really excited about the future — we can’t wait to share new episodes,” a spokesperson for Ludo told Daily Mail Australia in May 2022.

According to DisneyPlusInformer, fans shouldn’t expect to see new episodes until at least 2023. And, bearing in mind that the Los Angeles Times reports that each episode of Bluey takes about four months to produce, it could be even longer.

What could Season 4 be about?

Right now, no details have been released about Bluey Season 4. (Biscuits!) But it should be consistent with previous seasons as long as Brumm continues to write it. “Every episode generally starts from something I’m noticing in my kids’ life or my wife and I’s life that just keeps coming up,” Brumm told the Los Angeles Times.

In the Bluey subreddit, Redditors have started a thread to discuss the episodes they most hope to see in Season 4. This is a great place to read on the amazing ideas people have about the show — including one person wishing for an autistic character, one person wanting to see what happened to Chili’s mum, and many people wanting to see more of Rad and Frisky — or comment a few of your own ideas. You never know, Joe Brumm could be perusing this subreddit as we speak!

Watch the first two-and-three-quater-ish seasons of Bluey on Disney+.

This article was originally published on November 9, 2022