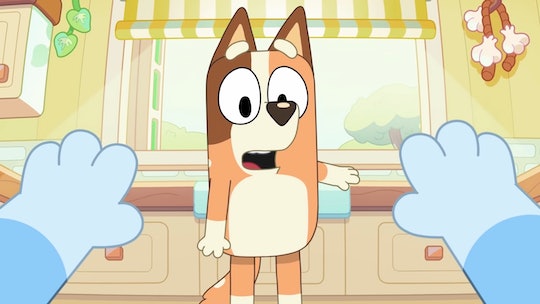 “Well, there’s something Auntie Brandy wants more than anything.”

Bluey is hailed by parents as being A+ children’s entertainment (with plenty of educational moments to boot!). But it also addresses tender, delicate issues in a sensitive way. These subtle nods to challenges like being gluten-free or having a rainbow baby are often first noticed by diehard fans. The most recent example of this has to do with Chili’s sister Brandy Cattle, also known as Auntie Brandy to Bluey and Bingo. TikTok discovered a connection between Auntie Brandy’s infertility journey and one of Chili’s early parenting moments from a previous episode — and it will break your heart. Note: Spoilers for Season 3 are ahead.

The theory shows just how deep Auntie Brandy longs for a baby.

TikTok user @world.shaker posted about this theory on Sunday, which has since gone viral. “#Bluey has emotionally destroyed me with this callback,” he wrote, before using the hashtags #infertility and #infertilityjourney among others. This theory has gone viral because it ties two episodes together in such a way that would be a huge coincidence if it wasn’t true.

First, a little background. His new video is in response to a comment from a previous video, in which he said, “Nothing’s really made me cry like ‘Baby Race,’ you know?” referring to Season 2, Episode 50 of Bluey. TikTok user @brittany.elizabet5 commented, “Brings me back to ‘maybe she saw something she really wanted’ from baby race and it wrecked me 😭😭😭.” This comment prompted him to look into the connection, and this new viral video is the result.

In the video, (which he warns, “Bluey Season 3 spoilers incoming”), @world.shaker pulls up Season 3, Episode 31 of Bluey, “Onesies,” where Auntie Brandy is playing with Bingo in a tiger onesie. Chili can be heard explaining why she hasn’t been around to visit the kids in a while.

“Well, there’s something Auntie Brandy wants more than anything as well,” she says. “And she can’t have it. And there’s not really anything anyone can do.” It’s implied that she’s talking about a baby, which is already extremely sad. But the earlier episode from Season 2 provides even more heartbreaking context.

Next, @world.shaker plays a clip from “Baby Race,” which is a flashback episode from when Bluey was a baby. “Why did I decide to walk in the kitchen?” Bluey asks in this episode, which shows her in a diaper walking behind Chili doing the dishes.

“I don’t know, sweetie,” Chili responds, as Chili turns around, surprised to see Bluey reaching out her. Her shocked face quickly turns to delight as she gets the biggest smile on her face seeing her daughter walk for the first time.

“Maybe you just saw something you wanted,” adds Bingo. At this point, @world.shaker has mashed the two clips on top of each other. On the bottom video, you can see baby Bluey reaching out to her Mum — aka, the “something” she wanted. She has a tear of joy in her eyes as she lifts her arms to welcome her baby. On the top, Auntie Brandy is seen lying on her side in the grass. After playing with Bingo, her niece runs away from her. Brandy just lies in the grass with arms reaching out to nothing as she has no baby to reach back toward her. It’s incredibly, deeply sad.

Despite not having any children of her own, Auntie Brandy views her nieces as hers and loves them so powerfully, yet, nothing can quite compare to having a baby of her own. It’s clear the pain of seeing those little ones is just too much to bear, and seeing it compared to Chili’s bond with her daughters makes the moment even more impactful.

“When people ask why we care about a kids’ show, you show them this clip,” @world.shaker says at the end of the video, looking emotional. He also commented on the video, writing, “The hands. One child walking towards while the other runs away. Their faces.” Bluey gets deep.

People were relating to Brandy’s journey.

Commenters on the video were feeling for Brandy. “GIVE AUNTIE BRANDY A BABY DAMMIT 😭,” one person wrote. “That’s the fastest something has ever made me cry, congrats,” another said.

“Omg so Brandy hasn’t seen Chilli & Bandit in 4 years bcoz they have the kids she can’t have & she can’t be around that😳 Omg. That’s dark & so sad,” wrote another.

“My name is Brandy and I've been struggling with infertility for 12 years,” one person commented. “This scene wrecked me.”

Someone else suggested, “I hope in a future episode Aunty Brandy can adopt. It could be a different breed of dog and they could have a discussion about all types of families.”

Bluey can open a conversation about infertility with kids.

Director of the Fertility Society of Australia and New Zealand Manuela Toledo said “Onesies” was a good episode to help parents talk to kid about infertility or kids born from fertility treatments.

She added, “There's also lots of social factors that might come into it. Maybe she's a single woman and hasn't been able to find a sperm donor, or maybe she's in a same-sex relationship and they haven't been able to utilise sperm or they haven't been successful with a sperm donor. There's lots of other things that could be going on in the background, but I think the important thing is that it actually opens that conversation.”

Leave it to Bluey to depict something so raw in such a beautiful, heartbreaking way.