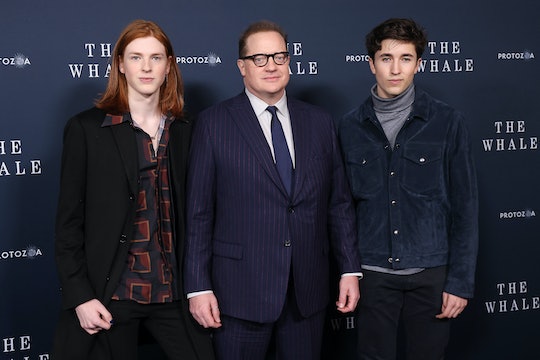 Fraser’s role in Darron Aronofsky’s The Whale earned him his first Oscar nomination.

Brendan Fraser’s career is having a well-deserved resurgence, thanks in large part to his role in Darron Aronofsky’s The Whale. The actor, who was basically in everything in the ‘90s, has a huge fan base supporting his return every step of the way. And on the home front, Fraser is lucky enough to be a parent to three sons. Two of them recently made their debut on the red carpet alongside their beaming dad. Here’s what else you need to know about the Oscar-nominated actor’s family.

Fraser’s role in The Whale earned him his first Oscar nomination.

The Mummy star earned his very first Oscar nomination for his role in The Whale, a pretty big deal considering this is his first role in 12 years. He chose to come back with his role as Charlie, a man living with obesity, because he wanted to “to be the voice for those who live the way that Charlie does, to depict him with dignity and with respect in a way that we haven't seen that character played on screen before,” Fraser told BBC News. Clearly he pulled it off.

Fraser’s teenage boys recently made their red carpet debut with their dad.

Two of Fraser’s sons, 18-year-old Holden and 16-year-old Leland, made their red carpet debut to support their father at the NYC premiere of The Whale. With all the accolades that Fraser is receiving for his big comeback role, he seems just as proud to be flanked by his dapper sons as they came to cheer on their famous father in their very first red carpet appearance. It should come as no surprise that Fraser’s boys know how to pose for the cameras. Of course, the Fraser brothers have some pretty great DNA. Not to mention, Holden and Leland are both models signed by the Marilyn Agency.

Fraser took a break from acting for his family.

As an actor, Fraser was everywhere for such a long time that it came as a real shock when he suddenly seemed to disappear. While there were several reasons why Fraser felt like he needed to step away from Hollywood, one of those reasons was his family. He had been married to former co-star Afton Smith since 1998, and the two divorced in 2007. He told GQ in a 2018 profile that he retreated to deal with the end of that relationship. And to be present for the three sons he was co-parenting with Smith after their divorce.

Fraser and Smith welcomed their first child together, son Griffin Arthur, in 2002. Griffin was born a redhead, his dad told Rachael Ray in 2010, and is on the autism spectrum. “Griffin’s rated on the autism spectrum ... so he needs extra love in the world, and he gets it,” Fraser told GQ adding that Griffin’s two little brothers protect him, “ever since they were small, one was always the spokesperson and the other was the enforcer.”

Fraser says his son Griffin brings out the best in people.

Fraser opened up about his now 20-year-old son to GQ in 2018, sharing that Griffin is “a curative on everyone who meets him, I noticed. People have some rough edges to them. Or he just makes them, I don't know…put things into sharper relief and maybe find a way to have a little bit more compassion. They don't put themselves first so much around him.”

Fraser and Smith welcomed their second son Holden in 2004, and his dad described him in 2010 to Rachael Ray as “brunette and is running for mayor.” So he’s one to watch, apparently.

His youngest son Leland was born in 2006.

Much like his older brothers, Leland Fraser has no social media presence. He has managed to stay very much out of the public eye, which appears to be a conscious decision made by his parents. All three sons reportedly split their time between their mother’s home in Connecticut and their father’s home in Bedford, but that doesn’t mean they won’t potentially consider acting themselves one day.

Fraser told Ray in 2010 that his kids are “the best actors,” pointing out that they hit all the emotional marks on a regular basis, per People. “They’re like little Greek tragedians. They’re so pure. ‘No, I will not go to bed! No!’ ‘I love you so much!’ ‘I hate you!’ It’s rage, fear, lust, joy. That’s what they teach in actor’s school, and all kids do is that.”

So watch this space, perhaps?

Fraser has hit the red carpet with his girlfriend, Jeanne Moore.

The Mummy actor has been hitting the red carpet with a new love in his life; makeup artist Jeanne Moore. The couple made their debut at the Venice Film Festival, and while neither has shared details on their relationship... they sure do look happy. All’s well that ends well.

This article was originally published on November 11, 2022