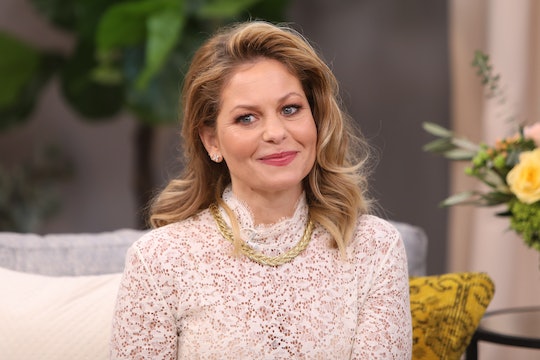 “DJ Tanner would never have stood for this.”

After 13 years of starring in Hallmark Channel Christmas movies, Candace Cameron Bure made the decision to switch networks and make movies with Great American Family. A network Bure where she serves as the chief creative officer and explained in an interview with The Wall Street Journal will tell stories that focus on “traditional marriage.” While Bure did not specifically cite Hallmark Channel’s lineup of holiday movies featuring gay marriage and LGBTQ stories, there was an almost instant backlash to her use of the phrase “traditional marriage” on social media.

Bure’s use of the phrase “traditional marriage” did not go unnoticed on social media.

JoJo Siwa, who recently made history on Dancing With The Stars by performing with a same-sex partner, shared Bure’s comments on Instagram and wrote, “honestly, I can’t believe after everything that went down just a few months ago, that she would not only create a movie with intention of excluding LGBTQIA+, but then also talk about it in the press. This is rude and hurtful to a whole community of people.”

Hilarie Burton Morgan took to Twitter to launch a diatribe against the exclusion of same-sex storylines on the Great American Family channel and Bure, writing, “Now they’re just openly admitting their bigotry. I called this sh*t out years ago when Abbott was at Hallmark. Glad they dumped him. Being LGBTQ isn’t a ‘trend.’ That guy and his network are disgusting. You too Candy. There is nothing untraditional about same-sex couples.”

George Takei called out the comment by simply sharing an article and writing, “Say what you really mean, Candace.”

One person pointed out that Bure’s character DJ Tanner would “never have stood for this” considering she was raised in a non-traditional household by three men.

Another Twitter user broke down the situation, “I just have to comment. Candace Cameron Bure left the Hallmark channel because they started to feature gay people, and she started her own network for the sole purpose of excluding gay people. There really is no hate like Christian love.”

Bure recently responded to the backlash by seemingly doubling down on her comments, taking to Instagram with a lengthy statement. “It absolutely breaks my heart that anyone would ever think I intentionally would want to offend and hurt anyone,” it read in part. She went on to note, “It saddens me that the media is often seeking to divide us, even around a subject as comforting and merry as Christmas movies. But, given the toxic climate in our culture right now, I shouldn't be surprised. We need Christmas more than ever.”

Her response did not cut it with many on social media like this Twitter user who wrote, “This is word salad. Candace Cameron said the words about keeping traditional marriage at the core. She knows what that phrase means and hoped it would elicit praise from the people the network is targeting. Blaming the media and ‘culture’ for the negative response is pathetic.”

Another social media user called out Bure’s wording as well, “So what Candace Cameron Bure is basically saying in her statement is the ole ‘hate the sin, love the sinner’ schtick. Notice how careful she was to not say ‘I support same sex relationships and gay rights,’ just ‘I love all of God’s children.’”

Candace Cameron Bure might have more work to do than that one statement if she hopes to appease fans who want to see her be more inclusive.