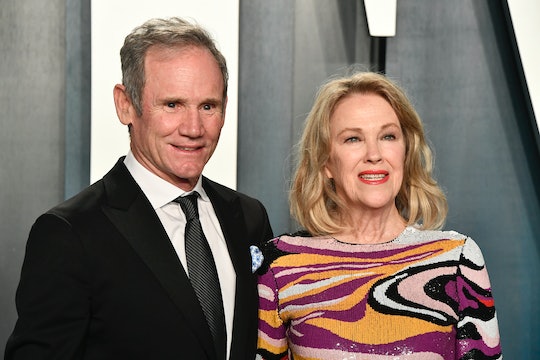 Catherine O’Hara Has Said Her Sons Are “Very Funny,” Just Like Her

“We all make each other laugh.”

Catherine O’Hara has become such an icon, it can be difficult to separate her from her acting roles. She is not, in fact, Moira Rose sparring with her spoiled adult children at the Rosebud Motel on Schitt’s Creek. Nor is she mother of six Kate McAllister running through airports trying to get back to her son Kevin who she left Home Alone. But she does have something in common with these women. O’Hara is herself a wife and mother, and clearly brings some of her own real-life wisdom to the characters who have shaped us all.

She Met Her Husband Bo Welch Working On Beetlejuice

When O’Hara was in Connecticut working on the set of Tim Burton’s dark comedy Beetlejuice as Delia, the homeowner with the unwanted ghosts, back in the late ‘80s, she met production designer Bo Welch. Now it should be noted that years earlier she went on a date or two with her frequent collaborator Eugene Levy, also known as Johnny Rose. “So, everybody at Second City theater tried to date everybody. Like, 'He makes me laugh. I should go out with him' ... So, we did maybe one or two dates,” she told Andy Cohen on Watch What Happens Live!.

The pair remained friends, leaving O’Hara free to start dating Welch. Although she told The New Yorker it took a beat for them to get together, “he was very attractive, and he finally asked me out. We went on location at the end of the movie, and we started dating. I moved to L.A. to be with him.”

After O’Hara “moved for love,” per the New Yorker, the couple got married in 1992. Welch continued to build his career, working as a production designer on movies like Edward Scissorhands, Batman Returns, and Men In Black II to name a few. He eventually went on to have his feature film directorial debut with the Cat In The Hat, and was nominated for an Emmy for his work on A Series of Unfortunate Events.

Meanwhile O’Hara’s career was taking off as well. She started to collaborate with Christopher Guest on cult classics like Waiting For Guffman, Best In Show, and A Mighty Wind, alongside her Schitt’s Creek co-star Eugene Levy. It wasn’t long before she and Welch began a new collaboration of their own. Parenthood.

Their Son Matthew Welch Was Born In 1994

O’Hara and her husband welcomed their oldest son Matthew, now 27, in 1994. Matthew has stayed completely out of the limelight, never attending public events with his parents and avoiding social media. Don’t worry though, he’s apparently just as funny as his mom. O’Hara told The Toronto Star in a 2007 interview, “They're very funny, and we encourage it. The older one does Warners cartoon bits — really old-fashioned, cheap-a** funny vaudeville stuff. And the little one does word play. I'm proud to say, we all make each other laugh.”

Matthew actually worked with his mom on the set of Schitt’s Creek along with his younger brother Luke, O’Hara told Vanity Fair in 2020. One was a set dresser and another worked on set construction. Following in their father’s footsteps, apparently.

Their Son Luke Welch Was Born In 1997

Much like his older brother, O’Hara’s youngest son Luke, who was born in 1997, eschews public life. He did work as an office production assistant on Schitt’s Creek for several episodes in 2019, which feels very on brand for the show where so many family members work together.

It was presumably a treat for O’Hara to work with her adult sons as well. She told TIME in 2019 that she envies Moira Rose all that extra time with her adult children. “I’m always wondering where my kids are,” she told the news outlet.

One Welch Is Always By Her Side

While she might be wondering where her sons are, O’Hara’s husband is firmly by her side. At least he was when she won her Golden Globe for Best Actress in a Comedy Series in 2021. She received her award virtually, and Welch had an applause track at the ready. Also a music to play her off stage if she rambled too long. Totally deadpan.

Always going for the joke. This family sounds like an absolute treat.