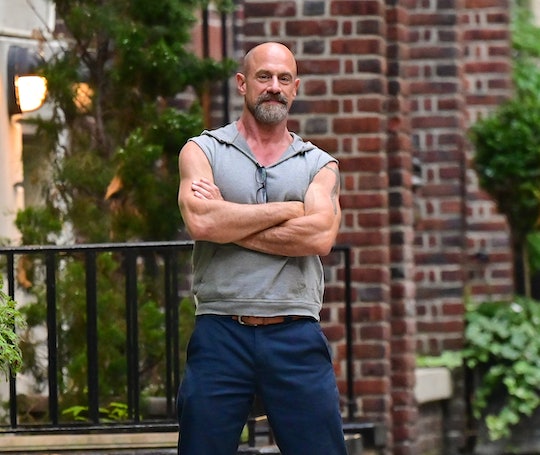 Especially now that he knows what it means.

The past year has seen a sea change in the way many of us saw Chris Meloni. I can’t remember a time when anyone disliked the Law & Order: SVU star, but when did we start to, you know, really, really love him? When did his backside become one of the most talked about celebrities on the internet? When, in short, did he become everyone’s “zaddy”? He’d like to know, too. Especially since Meloni just learned he’s a zaddy and responded in the most perfect way possible.

Meloni sat down for an interview with Men’s Health magazine recently to discuss his career, his super buff body, and of course, how exactly he came to be a zaddy. To be clear, he didn’t quite know what the term meant initially. “What is a ‘zaddy,’ exactly?” he asked in the interview. “I just thought it was a cutie thing.”

That’s right. He said it was a “cutie thing.” Now, he could have just looked up zaddy in the Urban dictionary to learn that the term is used to describe a handsome, intelligent, sexy older man who “smells good, looks good, and is good.” Personally I would like to add that a zaddy has a special something, a charisma. A twinkle in the eye of self deprecation mixed with confidence that cannot be faked or emulated.

Meloni continued by asking if zaddy was “Daddy plus? Daddy platinum?” But he eventually got it. “It’s for older gentlemen,” he told the magazine.

Chris Meloni is not mad about being a zaddy.

Meloni has been married to wife Sherman Williams for 26 years, and the couple have two children together, 20-year-old daughter Sophia and 17-year-old son Dante. He has lived a life, and he has absolutely no problem with how he came to be a zaddy at the age of 60. “How much am I allowed to taste of this fruit?” he said during the same interview. “How much am I allowed to enjoy this?”

This isn’t the first time Meloni has gleefully responded to being called a zaddy. In Interview magazine’s June issue, he said, “I’ve been called that a lot, and who am I to argue with it? Sure, I’m a zaddy.”

As much as he might be enjoying the zaddy-ness of it all, he also knows exactly what people are talking about when they discuss his cultural moment. His famous backside. “I catch flies with my a** cheeks, like a Venus flytrap,” he joked in the Men’s Health interview. “I’m clever with my a** cheeks!”

We love a self-aware zaddy who is just enjoying the ride. And catching flies with his butt cheeks.