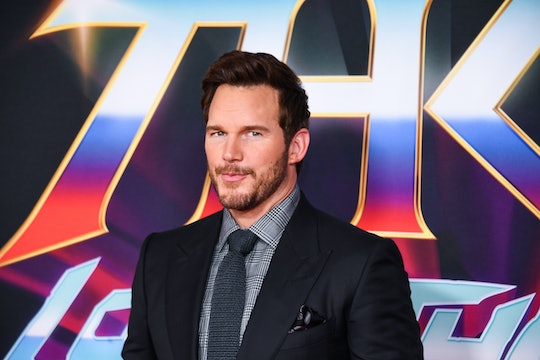 “My son’s gonna read that one day. He’s nine. And it’s etched in digital stone.”

Chris Pratt is finally opening up about his “cringeworthy” Instagram caption he made last November that caused a bit an uproar on social media. The Jurassic World Dominion star is dad to three children: Jack Pratt, 9, whom he shares with his ex wife, Anna Faris, and daughters Lyla Marie Schwarzenegger Pratt, 1, and Eloise Christina Schwarzenegger Pratt, 1 month, with wife Katherine Schwarzenegger. People were outraged when he thanked his wife for a “gorgeous healthy daughter” in a caption on Instagram Nov. 2, 2021, seemingly referring to the Jack’s health struggles from being born premature. But to hear Pratt tell it, that’s not exactly what he meant.

“I said something like, ‘Find someone who looks at you the way my wife looks at me.’ And then I gave her some sh*t in the thing and said, ‘But I love you. I’m so thankful for my wife — she gave me a beautiful, healthy daughter,’” the Guardians of the Galaxy star said in the July-August 2022 issue of Men’s Health. “And then a bunch of articles came out and said, ‘That’s so cringeworthy. I can’t believe Chris Pratt would thank her for a healthy daughter when his first child was born premature. That’s such a dig at his ex-wife.’”

At the time, people were tweeting their concerns about the comment. “I love Chris Pratt, but the ‘healthy daughter’ part made me wince. Although he may not have meant it as an insult, it sort of came off that way. Imagine how that will make his son feel, if he ever reads it?” one person wrote, as Page Six reported at the time.

Pratt was (understandably) upset by the comments. “And I’m like, ‘That is f*cked up,’” he told the magazine. “My son’s gonna read that one day. He’s nine. And it’s etched in digital stone. It really f*cking bothered me, dude. I cried about it. I was like, I hate that these blessings in my life are — to the people close to me — a real burden.”

The infamous Instagram post, which now has over 2.2 million likes, features a picture of Pratt looking at the camera, while Schwarzenegger smiles up at her husband. He wrote in the caption, “Guys. For real. Look how she’s looking at me! I mean. Find you somebody that looks at you like that!! You know!? We met in church. She’s given me an amazing life, a gorgeous healthy daughter, she chews so loudly that sometimes i put in my ear buds to drown it out, but that’s love!”

He added, “She helps me with everything. In return, periodically, I open a jar of pickles. That’s the trade. Her heart is pure and it belongs to me. My greatest treasure right next to my Ken Griffey Jr Upper Deck Rookie card. Which if you know, you know is saying a lot. It’s her birthday in about 6 weeks. So if I don’t get her anything, I’ll tell her to look back on this post. Love you honey. ❤️❤️”

Even though Pratt didn’t exactly apologize for his words, he seems to be writing captions with a little more sensitivity. For his anniversary with Schwarzenegger on June 8, Pratt wrote on Instagram, “Happy Anniversary to my strong, gorgeous, smart, lovely, organized, tough, kind, compassionate, wife. I’m a lucky man. God is so good. The kids and I are so grateful to have you. You do so much to better our lives. Thank you. I love you. We love you! ❤️❤️❤️”

The actor admitted to using humor as a coping mechanism because of his relationship with his late dad, Dan Pratt, a taconite miner. “I am a sensitive person,” Pratt told Men’s Health. “My dad knew that when I was a youngster, and it kind of made him dislike me. Or not dislike me but act like he disliked me — ’cause he probably grew up in a world where a guy like that could get eaten alive. And so he wanted to put calluses on me. Early on, I developed humor as a self-defense mechanism — I developed Andy, really. Andy on Parks and Rec was my clown that I had honed my entire life, a guy who is affable, who’s an intelligent person playing a dumb person.”

At the end of the day, let’s agree not to take things so seriously, but also to take an extra minute to think before posting on social media. When kids are involved, you can never be too careful how your words might come across.