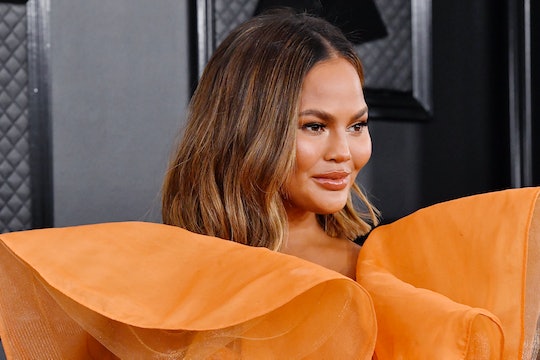 It was a defining moment for the model and Cravings entrepreneur.

While Chrissy Teigen has long been open about her and John Legend’s journey to parenthood through in vitro fertilization (IVF), she recently revealed it was one stranger’s quiet act of kindness that drove her to keep publicly sharing her experience with pregnancy loss and fertility struggles. In an interview with TODAY, Teigen opened up about an incident that she said had served as a “defining moment” and ultimately helped push her to team up with RESOLVE: The National Infertility Association and Ferring Pharmaceuticals to launch a campaign called Fertility Out Loud.

It wasn’t long after Teigen shared that she and Legend had suffered a pregnancy loss at around 20 weeks in late September that the 35-year-old model, television personality, and Cravings entrepreneur discovered how much of an impact she could have simply by talking openly and honestly about an often under-discussed subject. “There was one moment that really struck me, and that was being at the grocery store and somebody just quietly laying flowers in my cart,” Teigen told Sheinelle Jones and Dylan Dreyer during an interview on TODAY.

Teigen said it was this moment that made her realize she was far from the only person to experience such a loss. “I realized that there’s so many women that don’t get this kind of attention because you just don’t know that it happened to them,” she said. “They’re living through this privately and quietly, and it just was a big moment for me where I realized that I could be this person that people could see and look up to as somebody that had a platform, where their stories were going to be recognized. For me, that was a very defining moment.”

Because this isn’t the first time Teigen has mentioned this specific exchange, it’s clear the gesture had a major impact on her. In an essay published on Medium last year, Teigen described how “the checkout lady quietly added flowers to my cart” when recounting some of the “beautiful” moments of kindness she experienced after first opening up losing her third child, a son she and Legend named Jack.

“The worst part is knowing there are so many women that won’t get these quiet moments of joy from strangers,” she wrote. “I beg you to please share your stories and to please be kind to those pouring their hearts out. Be kind in general, as some won’t pour them out at all.”

When announcing the launch of the Fertility Out Loud campaign on Monday, Teigen revealed it was support like this that inspired her to find ways to pay that support forward to others. “Oftentimes, what kept me going through my IVF journey was the support I received from family, friends, and the fertility community,” Teigen said in a statement released Monday. “And now I want to offer my support in return. I want to make sure anyone struggling knows that they are not alone, and I want to encourage them to embrace their fertility out loud and speak up to find the help they need.”

Her involvement with RESOLVE: The National Infertility Association and Ferring Pharmaceuticals’ Fertility Out Loud campaign, which seeks to raise awareness and cultivate action and community among those currently on a fertility journey, does exactly that. “There's no shame in sharing your story and advocating for yourself," Teigen said.