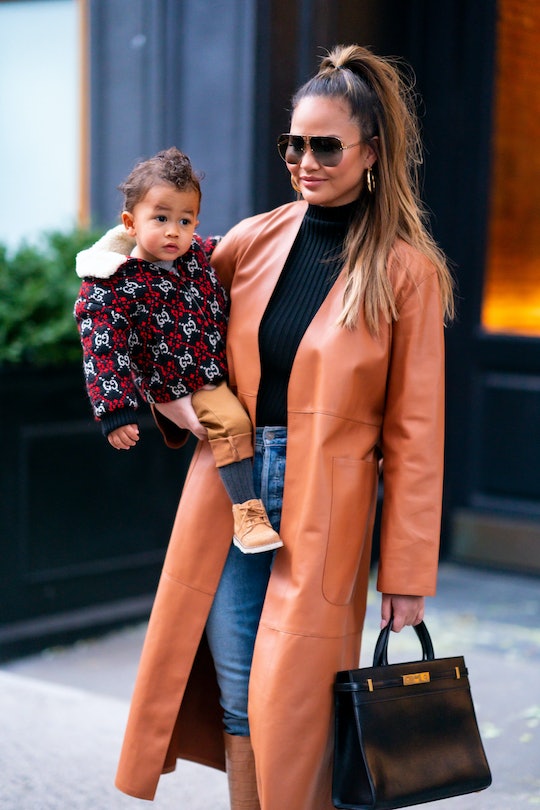 “I think more men should embrace their emotions.”

As a mom of a 2-year-old little boy, Chrissy Teigen is teaching her son Miles to be in touch with his emotions. In a recent interview with People, the Cravings cookbook author opened up about her sensitive little boy who “wears his heart on his sleeve,” and she is taking steps to encourage him along the way.

Teigen and her musician husband John Legend are parents to little Miles and his 4-year-old sister Luna, and anyone who has followed the busy mom on social media is pretty familiar with their two kids. Arguably a bit more so with Luna, if only because she’s the oldest and, let’s face it, has a bit of a sassy edge that the internet just loves.

That’s the genius of Teigen’s parenting style; she clearly encourages her kids to be themselves. And when it comes to son Miles, that means embracing his emotional side. “Miles is very emotional. He's a lot like me too," Teigen told People. "He wears his heart on his sleeve, and we embrace that. I think more men should embrace their emotions. I think that's really important in this world. That it's OK to cry, and it's OK to be upset about something or to be sad about something. We're going to talk it through and it's OK."

As Teigen wrote in an Instagram post about herself and her little boy, “same sensitive souls, us two.”

Chrissy Teigen wants her son to be a sensitive man.

Teigen credits her husband with being a solid, sensitive male role model for their kids. "There is no 'Be a man' in our house," she explained to People. "There's no right way to be a man, and John is so good about showing them through how he treats me how to be a good man, how to be a good father. It's wonderful to see."

Historically boys have been raised in past generations to sometimes disregard their emotions. To “be a man,” as Teigen put it, rather than becoming more self-actualized and vulnerable. The importance of giving all children, and perhaps boys specifically, the emotional vocabulary to deal with their feelings cannot be overstated. Modeling that behavior for their kids is a wonderful way for parents to encourage that level of vulnerability as well.

As a mother of two has gone through a difficult year, struggling through a pregnancy loss last October and, more recently, walking away from Twitter after 10 years because of an onslaught of negativity. Through it all, she has been open about her emotions and is clearly modeling that behavior for little Miles in an effort to help him become a sensitive, caring man.