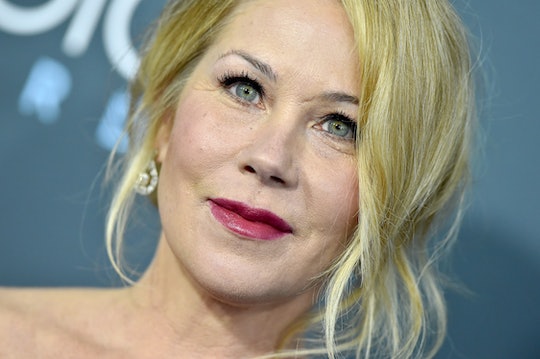 “It’s been a tough road. But as we all know, the road keeps going.”

Christina Applegate isn’t just a comedy genius, she’s a warrior. And apparently she’s ready to tackle whatever health crisis comes her way. After going through a double mastectomy in 2008 when she was diagnosed with breast cancer, struggling with insomnia and early menopause, the actress revealed she has multiple sclerosis. In a tweet posted on Monday, she admitted that she had received the diagnosis a few months ago and it’s been a “strange journey.”

The Dead To Me actress took to her Twitter feed late Monday to share the difficult news. “Hi friends. A few months ago I was diagnosed with MS,” she wrote. “It’s been a strange journey. But I have been so supported by people that I know who also have this condition. It’s been a tough road. But as we all know, the road keeps going. Unless some a**hole blocks it.”

Multiple sclerosis, also known as MS, is a disease where the immune system attacks healthy cells. It can be potentially paralyzing, affecting the nervous system via the brain and spinal cord. Some people who have been diagnosed with multiple sclerosis might lose the ability to walk, while other people might go through long periods of remission. There is no cure for MS.

Christina Applegate has been diagnosed with MS.

Applegate’s announcement was met with an outpouring of love and support from her fans, many of whom have family members with MS. “Sorry to hear that Christina! My mom was diagnosed with PPMS 6 years ago,” wrote one Twitter user, “and it’s been quite a journey, filled with ups and downs.” While Applegate didn’t say which of her friends with the condition she’s turned to, her co-star from The Sweetest Thing, Selma Blair, was also diagnosed with MS in 2018.

The Bad Moms star is mom to 10-year-old daughter Sadie Grace LeNoble with husband Martyn LeNoble, and once told People that her daughter “has healed me in so many ways.” She added. “She's just made my life so much better. She's opened my whole soul.”

Applegate is on a challenging road and, as she explained in a follow up tweet, she’s going to need some privacy moving forward, “As one of my friends that has MS said ‘we wake up and take the indicated action.’ And that’s what I do. So now I ask for privacy. As I go through this thing. Thank you xo.”