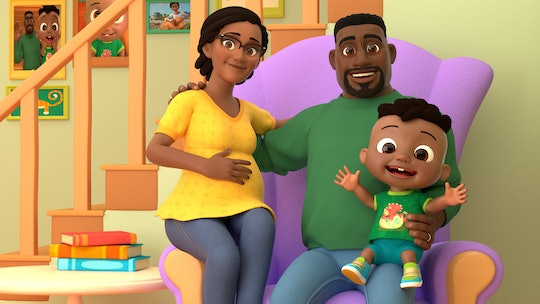 There's Officially A CoComelon Spinoff & It's All About JJ's BFF Cody

CoComelon entertains babies, prepares toddlers for potty training, and gives parents a moment to get things done around the house (or some much-needed quiet time in the car!). Now, the most-watched kids brand on YouTube has launched its first-ever spinoff show, It’s Cody Time, featuring JJ’s best friend, Cody Green — and your little ones are going to love it!

Moonbug Entertainment, the award-winning global entertainment company behind CoComelon and other kid favorites like Blippi and Baby Bum, announced the new musical series on May 11. It’s all about Cody, who has been on CoComelon since 2019 as JJ’s classmate, then his next-door neighbor, and finally, his best friend.

“Cody’s been a fan favorite to our global audience for years,” Patrick Reese, general manager of CoComelon at Moonbug Entertainment, said in a press release. “We’re excited to launch It’s Cody Time and give fans a chance to get to know Cody and his family a bit better.”

If your child loves CoComelon, then they will love It’s Cody Time, too. The preschool series follows a similar format and revolves around “common themes of childhood fun and celebrating big moments for little kids,” according to Moonbug Entertainment. The first two episodes, which are available on YouTube now, focus on pregnancy, Cody becoming a big brother, and the joys of family.

It’s Cody Time will bring more diverse characters to the screen. Cody’s father, Kwame, is a chef, who comes from Jamaican and Ghanian descent. His mom is Black and works full-time as a pediatrician.

“Representation matters,” added Reese in the press release, “and we want to bring more content with diverse lead characters, inclusive storytelling and aspirational role modeling to children around the world.”

Episode 1, “Cody’s Spy Song,” features Cody pretending to be a detective to discover the mysterious changes happening around the house. Episode 2, “I’m Going to Be a Big Brother,” revolves around what to expect when his baby sister is born.

The initial story arc “will aim to help children learn through relatable situations and to prepare them for big-sibling responsibilities and expectations,” Moonbug Entertainment said.

It’s Cody Time is sure to be a hit, as CoComelon alone generates over 3.3 billion average monthly views and over 135 million YouTube subscribers, with videos featuring Cody garnered over 91 million watch hours, according to Moonbug Entertainment. CoComelon is available on multiple streaming platforms, including Netflix, Hulu, Amazon Prime, and Roku, as well as playing on Cartoon Network.

The first two episodes of It’s Cody Time are available on YouTube, and a new episode will premiere each Wednesday. If your kids don’t already love Cody, they will now (and you’ll finally have new songs stuck in your head for a change!).