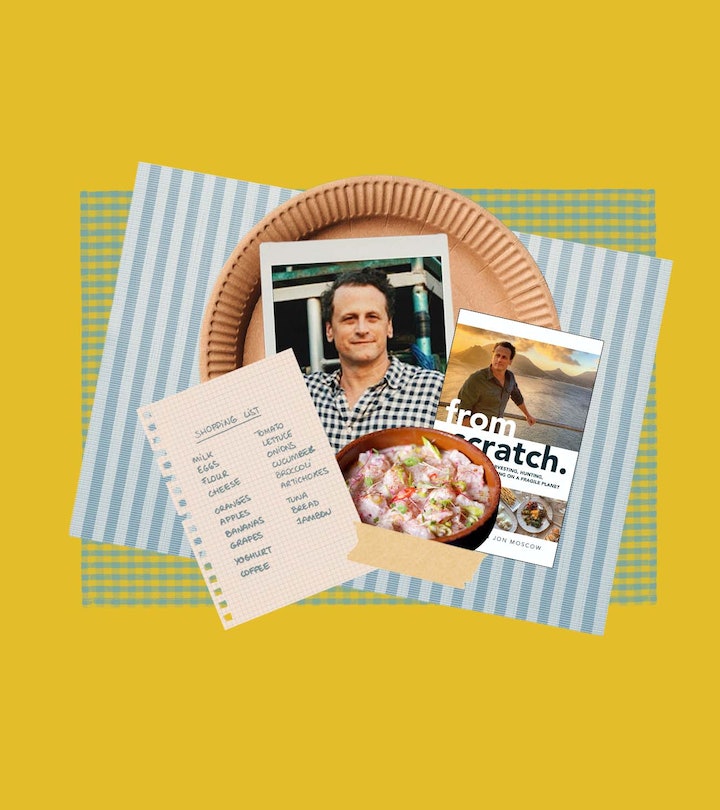 The actor, dad, and best-selling author chatted with Romper about his journey into food production, globally, and at home.

David Moscow doesn’t think of himself as much of an expert in anything... except eating. He comes by it honestly: the actor (Big, Newsies, Honey) was born and raised in one American food capital (New York City) and currently lives in another (Los Angeles). But a few years ago, like many Americans, he realized that he had no meaningful connection to the food he was eating — from where it came from to the lives of the people who made consumption possible. His FYI network series, From Scratch, took up this issue and, over the course of four years, sent Moscow around the world to, in his words, be “an actor playing a host posing as a journalist,” gathering ingredients from the source (wherever that may be) to better understand the question of “what’s for dinner?”

In his best-selling book From Scratch: Adventures in Harvesting, Hunting, Fishing, and Foraging on a Fragile Planet (co-written with his father Jon), Moscow delves into the details these adventures. And while the travels are done (for now — Moscow seems content to be at home in Los Angeles with his wife, Karen, and two children, Harrison, 4 and Maddie, 6 months) it’s clear from our discussion that Moscow’s interest and passion for this subject remains undiminished.

“Once you start to explore one issue, it becomes an onion with all these incredible layers,” he says by phone. “It's not only about one given community and the fact that it takes — when all is said and done — 61 people to make a pizza slice. We're all tied to one another and so is food production and the environment. We live on a fragile planet. Even looking at one thing, you really start to run into how we're on a tightrope here with regards to the collapse of our food systems.”

Moscow spoke to Romper for our Family Dinner series about this delicate balance, how his childhood informed his interest in food, and what he’s hoping to instill in his own children.

My mom is one of those amazing mom cooks. She had her 10,000 hours of practice to become a genius cook by the time I came around, and so I was very blessed. Even today, people will talk to me about legendary dishes that my mom brought to a potluck or something like that. Growing up I was her right hand man in the kitchen. It's very strange to suddenly get into teaspoons and cups because I learned a pinch of it, a handful of that. We're still trying to get her to write down the foundational dishes, and I think she's holding them hostage for some reason. I don't know why. I thought that if I gave her a grandkid I would get them, but I gave her two and I’m still waiting.

My dad is the opposite of a foodie. He’s a community activist and a workaholic, and so he would take his dish and go sit down in front of his typewriter and then his computer. Food is just nourishment to him. But my brother, me and my mom would eat together. Maybe once or twice a week the family ate together.

And what about now that you have a family of your own? How do meals look today?

The family meal is super important. I like that we are all sitting at the table, which is different than I had as a kid. Every night we are at the table sharing meals, and even our little one who's not eating food yet, you can tell she's watching us eat, and she is getting interested now. It's probably getting close to some real food for her.

Who usually does the cooking in your family?

I'm the cook. Karen's got a very intense job, so I do the cooking and the washing up, and she carves out the time in her day to have a sit-down meal with us, which is a blessing. Then I make breakfast and I make the lunches for the kids, though Karen makes the lunch for the girl, since she’s breastfed.

That’s another full-time job in and of itself.

I’ve been looking at your Instagram and it looks like your son really enjoys working in the kitchen.

Moscow with his son, Harrison.

My son is my sous chef now. He's four, so it adds some time to the cooking. But he takes a cooking class here in L.A. for youngsters every Monday afternoon, and he comes home with his own meals, so cooking is one of his loves. So sometimes you go into the kitchen and he's laid waste to all the spices to make something. Though I will say that when he does make sauces and he says it's good it is actually good… sometimes. I love that he loves cooking. I love that he has confidence in the kitchen. I love that he thinks that he can create new and interesting tastes, which he does, and I hope that my daughter does the same thing.

I want to talk a little bit about From Scratch and this incredible food journey around the world. What surprised you most?

The extent to which, if we look back on the helicopter view of food, it ties humanity together in a way that's undeniable. There's a chapter in the book about fishing in the Philippines where I was making kinilaw, which is a Filipino dish, and I needed to get this fish sauce called patis, which is a foundational ingredient in Philippine cuisine. We went out on a boat, and we couldn't get fish. When we dove into that, I learned it’s because the South China Sea, or the Philippine Sea, has lost 70% of its fish in the last 20 years.

Our fate as a species is all related to food production. But there’s hope: we can learn from countries like Costa Rica and Iceland, who are doing the right thing in many regards.

Has creating the book and the series changed the way you eat at all?

Yeah. One of the points that I discuss in the book is unconscious consumption, of meat in particular. It has become super important for me because I do not agree with the way that most animals are treated before they come to our plates. So I decided to move meat from the center of every meal and eat it dramatically less. When we do consume meat, we are paying for humanely raised meat, and through companies that we know are paying their workers well, which hits our wallets, and thus reduces the amount of meat that we are eating. But what I learned from the book is that I don't necessarily have a problem with killing animals. People have eaten animals forever, and that's not at the heart of my issue. My issue is how we treat them and how we treat the people who make our food. There are meat dishes that are a part of my community and family traditions, and leaving that community is not something that ... I'm not there yet.

More Like This
Jinger Duggar Was Taught Motherhood Defined Her — & Then She Broke Free
Does The FDA's Plan To Limit Lead In Baby Food Go Far Enough?
Are We All Stressed About Grocery Prices Right Now Or Is It Just Me?
Beyoncé’s Kids Got A Sweet Shout-Out As She Made History At The Grammys
What Parents Are Talking About — Delivered Straight To Your Inbox