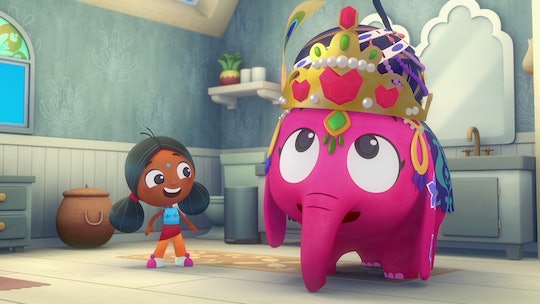 A 7-year-old and her color-changing baby elephant BFF.

If there’s an animated character out there living a better life than 7-year-old Deepa from Netflix’s new animated series Deepa & Anoop, I would love to hear about them. Not only is Deepa growing up in a bed and breakfast named Mango Manor which in itself sounds like an absolute dream, she also has a best friend that’s a color-changing baby elephant named Anoop. And in an exclusive new look at Deepa & Anoop shared with Romper, you’ll see that Deepa is making the absolute most of her dream situation by going on adventures with Anoop.

In Romper’s exclusive clip from Deepa & Anoop, the 7-year-old and her best pal head into the family’s basement to face an (imaginary) dragon in an effort to help locate her mom’s keys. So a color-changing elephant who is also helpful, truly a dream life. The best friends head down to the basement in protective armor like swim goggles, a pot for a helmet, and a mop to “battle” their dragon. Also known as a boiler providing heat for the home. They “rescue” Deepa’s mom’s keys from the dragon and do a little celebratory dance before Anoop changes from hot pink to yellow with joy.

The new Netflix series premieres on Aug. 15 and is more than just an adventure where the two “concierges of fun,” as Deepa and Anoop call themselves, go out of their way to make sure guests have fun at Mango Manor. It will also feature 18 original songs and dance performances, many of which will be done in the traditional Bollywood tradition to honor Deepa’s Indian heritage. The series was created by acclaimed Bollywood animator Munjal Shroff for Mattel as the company’s first original series based on intellectual property, a realm the toy maker plans to expand on in the future. But for now, Deepa & Anoop are the first out of the gate.

“We have been lucky to work alongside best-in-class advisors and consultants during every stage of Deepa & Anoop’s development,” Christopher Keenan, Senior Vice President of Creative at Mattel Television, said in a statement shared with Romper. “Our hope is that young audiences around the world will find this heartwarming series as authentic as they do relatable. We could not be more proud or excited that Deepa & Anoop is Mattel’s first original series based on all-new IP.”

Watch the first season of Deepa & Anoop on Netflix on Monday, Aug. 15. There will be 11 30-minute episodes and two 22-minute specials, so lots of fun to be had. Plus a color-changing baby elephant, what more could you want?

More Like This
Exclusive: Three Siblings With Super Powers Protect National Parks In Spirit Rangers
Kid First Responders Rescue Puppies In Disney’s Cute New Series
'Workin’ Moms' Season 7 Is Reportedly In The Works! Here’s Everything We Know
'Squid Game' Is Coming Back For Season 2 On Netflix: Here’s What Parents Need To Know