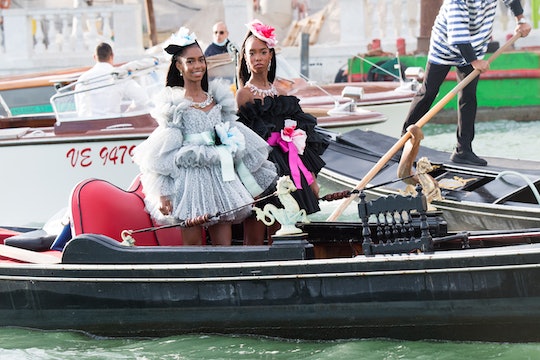 D'Lila Star and Jessie James get it from their mama!

The twin daughters of Sean "Diddy" Combs and the late Kim Porter are keeping their mother’s memory alive by following in her fashionista footsteps. On Sunday, D'Lila Star and Jessie James, 14, made their runway debut at Dolce & Gabbana's 2021 Alta Moda runway show in Venice, Italy.

The girls arrived at the venue in a gondola. D’Lila wore a sky blue and white, puffy lace dress, and Jessie wore a black and pink puffy lace dress. Their half-sister, Chance Combs, 15, whom Diddy shares with Sarah Chapman, also appeared in the show. The proud dad of three was in the front row supporting his daughters.

“Words can’t explain. LOVE,” he captioned photos of the girls’ runway walks on his Instagram.

D'Lila Star and Jessie James shared their excitement on their joint Instagram pages. “OMGGGG THIS IS LITERALLY A DREAM COME TRUE,” the twins captioned their pictures. “We are so excited that we got to walk in the @dolcegabbana fashion show. Thank you so much for having us join the show in Venice, Italy. And we want to say a HUGE Thank You to our dad and team for helping us get through this amazing show. WE LOVE YOU GUYS AND THANK YOU ❤️❤️ we hope to be back soon.”

The girls' jumpstart into modeling is a sweet ode to their mother who was also a high fashion model. Porter passed away in November 2018 at the age of 47 from pneumonia.

Diddy and Porter shared four children together, including the twins, and two sons, Quincy, 30, and Christian, 23. The two never married, which he later admitted that he regretted. Although the couple’s relationship did not work out romantically, the two remained close friends and co-parents, according to a source via People.

The 51-year-old shared one request that Porter had of him before she died. “One night I was checking on her, and she was like, ‘Puffy, take care of my babies.’ She actually said that to me before she died,” he told Essence Magazine in a 2019 interview.

Shortly after she passed, Diddy expressed his grief on social media in various videos and posts. “We were more than best friends, we were more than soulmates,” he said in a now-deleted post. “WE WERE SOME OTHER (expletive)!! And I miss you so much. Super Black Love.”