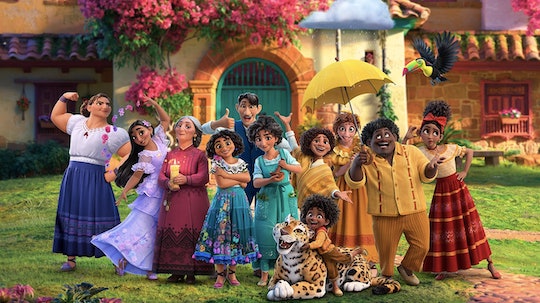 "There's so many characters there's a lot of stories we could tell inside that house.”

We know we’re not supposed to talk about Bruno, but we can’t seem to help singing about him an awful lot these days. And, of course, once we start talking about Bruno, we start talking about the whole familia Madrigal and how much we love Encanto, and especially how much we love the music, written by none other than Lin-Manuel Miranda. On Jan. 21, Miranda went on Good Morning America to discuss the film’s genesis, success, and the burning question: Will there be an Encanto sequel?

A sequel is not planned, but there’s still a chance...

When asked the question on everyone’s mind — will we be getting an Encanto sequel? — Miranda admitted to Good Morning America that he didn’t know the answer, but did not shut down the possibility that it could happen.

“I’m thrilled that it’s resonating,” he replied in traditional Miranda humility and optimism. “There's so many characters there's a lot of stories we could tell inside that house so... ask the good folks at Disney."

In the meantime, the Encanto soundtrack continues to top the charts

But even as the song strives to climb ever higher, the soundtrack as a whole has already reached the zenith: earlier that same week, the soundtrack knocked Adele’s 30 from the #1 spot on Billboard’s Top 200 chart.

You can stream Encanto on Disney+

While it’s still TBD on whether or not we’ll get a sequel, you can watch Encanto as many times as you’d like on Disney+. You can also listen to the Encanto soundtrack on repeat. If you do, you’d be in good company with Miranda’s father, who predicted the music’s success.

“We made most of this movie during the pandemic and I don't think it's an accident that a movie about an intergenerational family all under one roof since we've all been under one roof together is resonating so much with audiences," Miranda told Good Morning America. “My father-in-law, who never chimes in about my work, was like, 'I can't stop singing that one Bruno tune that I keep hearing coming from your room,’” he recalled, laughing. “That should have been the first tip-off."

More Like This
The New Avatar Movie Will Tell A Family-Centric Story & It Looks Amazing
The Best Family-Friendly Movies To Get You In The Mood For Summer
Are You There God? It’s Me, Margaret Is Finally Heading To The Big Screen
Zac Efron Was Asked If He Wants Kids & His Hilarious One-Word Answer Says It All