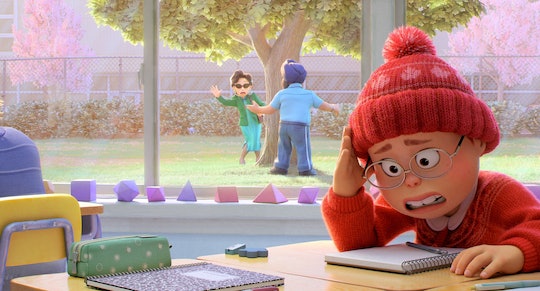 Set in Toronto in the early 2000s, Pixar’s Turning Red follows 13-year-old Mei Lee who turns into a giant red panda when she gets too emotional, excited, or overwhelmed. Like the Hulk, but cuter and more relatable. But what prompts this in Mei Lei? The story of Turning Red is about a 13-year-old going through 13-year-old life things, like puberty, periods, crushes, and all the awkwardness of adolescence we remember so well. So here’s everything you need to know.

Turning Red follows a teen girl and her protective mom

Turning Red is a coming-of-age film that tells the story of Mei Lee, a Chinese-Canadian teenage girl struggling as she goes through that awkward teenage phase with an overprotective mom.

“Young actress Rosalie Chiang lends her voice to Mei Lee, a 13-year-old who suddenly ‘poofs’ into a giant red panda when she gets too excited (which is practically ALWAYS),” the official synopsis of the movie reads. “Sandra Oh voices Mei Lee’s protective, if not slightly overbearing mother, Ming, who is never far from her daughter — an unfortunate reality for the teenager.”

The trailer is adorable and relatable

In the Pixar trailer for Turning Red, Mei Lee is seen sitting in a classroom, preparing to do some complicated math equation, when a classmate passes her a note to let her know her mom is standing outside. Hiding behind a tree, in fact, and trying to avoid being seen. She is discovered by someone who appears to be school security, fights with him, and the entire class watches. Poor Mei sits at her table, and despite her best efforts to stay calm, explodes in a huge poof into an enormous red panda. She runs along the rooftops to her home, where she tries to calm herself with a little face massage. (Fun fact: This scene was actually inspired by director Domee Shi’s own life and mother.)

While most of us don’t have to worry about turning into a red panda when we get emotional, the message is relatable for kids and parents alike. Parents know how tough it is to let go of their kids as they grow up. Kids know how it feels to want to break away and live their own lives even as they’re nervous about what the future might bring. Just like Mei and Ming Lee.

‘Turning Red’ sees a young girl turn into a red panda when she gets excited.

The movie has lots of Canadian connections

Chinese-Canadian director Domee Shi wanted to make a movie actually set in the city of Toronto with Turning Red. Shi, who also directed the Oscar-winning 2018 Pixar short Bao, told Yahoo! News in 2019, "I don’t see Toronto really depicted a lot in movies and if I do, it’s always disguised as another city, and I just wanted to pay homage to my hometown.” The Canadian elements are everywhere, from the CN Tower in the background as Mei jumps from roof to roof, to her maple leaf t-shirt, to Sandra Oh, who voices Mei’s mom Ming, hailing from Ottawa, Canada.

The movie also has a character living with diabetes

Eagle-eyed fans of the new movie noticed something in the trailer for Turning Red that will surely be a big deal for kids who are living with the same condition; a young character with a glucose monitor can be seen in the background, indicating they have diabetes. The character also had a purple insulin pump on their hip, which means the creators of Turning Red clearly did their research into what living with diabetes actually looks like.

It’s available to stream on Disney+

After months and months of waiting, Turning Red premiered on Disney+ on March 11.

This article was originally published on July 14, 2021