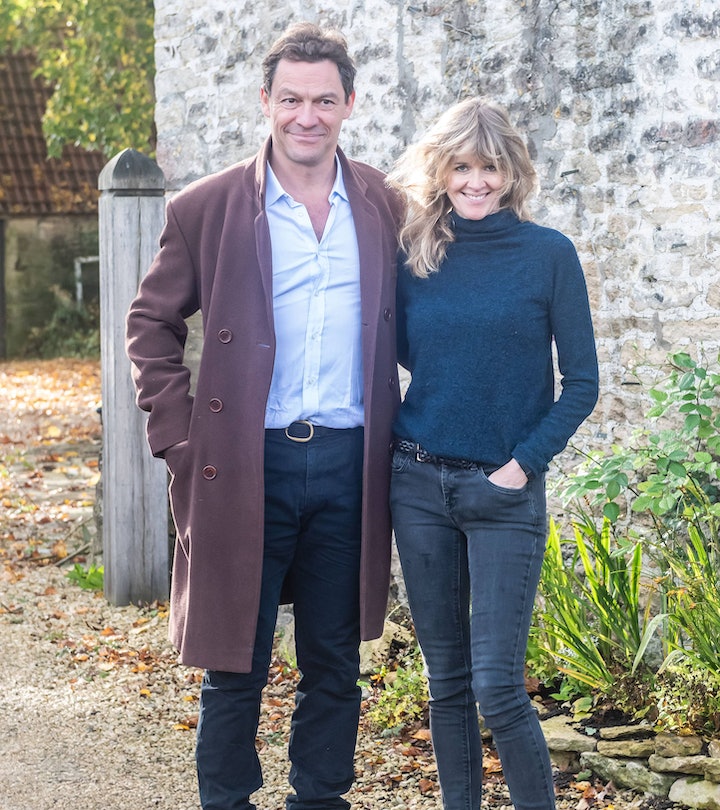 He hangs out in castles with his wife and five kids. Just sayin’...

Dominic West is currently starring in the fifth season of The Crown as father of two then-Prince Charles, and it’s a role he should be able to understand quite well. Not because he is, himself, a frustrated heir to the throne of England as Prince Charles is portrayed in the fifth season of the Netflix drama. But because he is a husband and a father of five. Oh, and he’s married to royalty. Here’s what else you need to know about his family.

The actor first met Catherine FitzGerald when they were both students at Trinity College in Dublin, Ireland. It was a romantic time for both of them, FitzGerald told the Irish Independent in 2021. “We had a wonderful love affair. We would look over Dublin, reading poetry to one another with the mountains in the distance. We had all the time in the world to explore the pubs and back streets and walk the canal.”

While they were a good match, FitzGerald admitted she “left him” at the end of the summer. Years later, the two rekindled their romance and were married in 2010.

His wife is legit royalty.

Prior to marrying West, FitzGerald was married to Edward Lambton, 7th Earl of Durham, from 1995 before they divorced in 2002. She is also a member of the FitzGerald family, an Irish and British line of aristocracy that dates back hundreds of years and even has her own castle, Glin Castle. Her father Desmond FitzGerald held the title of the Knight of Glin, and while she does not hold an official title, she is definitely royalty. I wonder if she gave him tips on playing a royal in The Crown.

Prior to marrying FitzGerald, West welcomed daughter Martha with ex-girlfriend Polly Astor in 1999. The couple eventually parted ways but co-parented Martha. Who eventually followed in her dad’s acting footsteps.

His daughter Martha starred in Pursuit of Love alongside her dad.

Martha West starred alongside her dad in the BBC series Pursuit of Love, and continues to take on roles. She also joined him at the 2019 Met Gala, and he could not have looked more proud to escort her to the event if he tried.

His daughter Dora is 16 years old.

West and FitzGerald’s oldest daughter together Dora is 16 years old, and does not appear to have any social media presence whatsoever. In 2020, her parents shared a photo of her alongside her family at Glin Castle celebrating Christmas, but she is staying out of the limelight beyond that.

His son Senan stars in The Crown as Prince William.

West’s 14-year-old son Senan was chosen to play Prince William in the final few episodes of Season 5 of The Crown, despite not having any acting experience. It helped that the blonde, blue-eyed Senan looked a lot like a young Prince William, and of course that natural father-son chemistry didn’t hurt either.

His son Francis joined the family in 2010.

Much like older sister Dora, Francis keeps a low profile. Most likely because Francis is just 12 years old and has not as yet joined the family business of acting. Perhaps he’s busy running around Glin Castle in Ireland with his siblings and living his best life. As West told House and Garden, “Glin enriches my life and my kids' lives in terms of identity and continuum. My children are surrounded by Irish wit and humanity. They have a far broader existence than they would anywhere else in the world.”

His daughter Christabel is the baby of the family.

At just 7 years old, West’s daughter Christabel is definitely the baby of the family. For evidence of this, look no further than the family’s recent outing on the red carpet for the premiere of The Crown, where she brought along her favorite stuffed animal and grinned shyly at photographers.

These West kids are living a broad existence indeed.